The new iPhone XS, XS Max, and iPhone XR models all come equipped with support for dual-SIM functionality through the inclusion of a standard nano-SIM slot and an eSIM, a feature that has previously been used in iPad models.

According to Apple's website, eSIM functionality will not be available when the new iPhones launch, with the company instead planning to introduce it later this year through an iOS 12 software update. 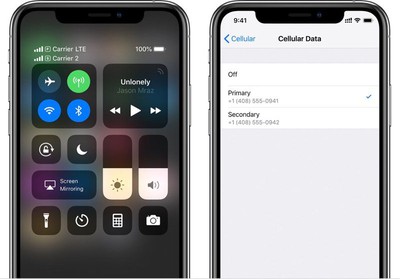 Dual-SIM support will allow the iPhone XS, XS Max, and XR to support two cellular plans at once. This is useful for people who have two phone numbers for work and personal use and for travel.

Both numbers used with a dual-SIM iPhone can make and receive voice calls and receive SMS and MMS messages, but an iPhone can only use one cellular data network at a time. That means if one number is on a call, a call to the other number will go to voicemail.

There will be a section in the iOS 12 settings to establish a default number and to label both cellular plans that are in use, with Apple outlining these features in a support document. You will be able to easily make and receive calls from both numbers and switch phone numbers for a call.

Not all carriers are going to support eSIM functionality, but in the United States, it will work with Verizon, AT&T, and T-Mobile devices. Apple has a full list of carriers offering eSIM support on its website.

Surely it would be more beneficial to customers, and cheaper to produce, the dual SIM card model worldwide.

eSIM makes it easier to change carriers and follow better plan offerings (and prices). You can make a switch any time you want without going to a retail location to do so. Carriers are going to HATE this.
Score: 5 Votes (Like | Disagree)

martyjmclean
Surely it would be more beneficial to customers, and cheaper to produce, the dual SIM card model worldwide.
Score: 5 Votes (Like | Disagree)

palmerc2
It would be incredible if WhatsApp would allow two phone number accounts active in the app simultaneously.

BasicGreatGuy
Later this year meaning some time in 2019? Just when I thought I was free of two phones, they pull me back in.
Score: 3 Votes (Like | Disagree)

I wish there was a way for them to auto switch between two networks for mobile data. If I lose service on one network, switch to the other network automatically. Like a primary and secondary cellular data option.

Seems silly to pay 2x as much just for the rare occasions you don't have service on one network.
Score: 2 Votes (Like | Disagree)

Surely it would be more beneficial to customers, and cheaper to produce, the dual SIM card model worldwide.

Ultimately, Apple only wants eSims so as not to have to accommodate the SIM tray and mechanism. So, dual sim cards is heading in the wrong direction.

How is this easier than popping in a different SIM?

Not having to deal with a SIM at all is infinitely "easier than popping in a different SIM," technically speaking.
Score: 2 Votes (Like | Disagree)
Read All Comments