Apple has recently been sending out surveys to customers who purchased an iMac Pro, asking them about which features drew them to the pro-level machine and what they like or dislike about the iMac Pro.

Some of the survey questions were shared on Twitter, with customers asked to point out some of the most important iMac Pro features, like Thunderbolt 3 ports, Xeon W processors, T2 chip, external display support, and more. 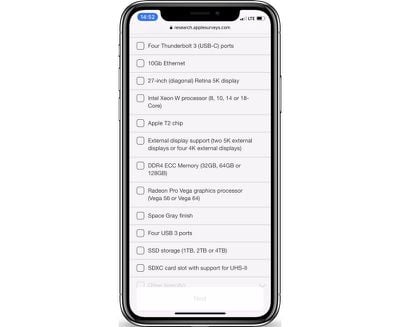 Apple is sending out a survey to iMac Pro buyers. Questions include whether you bought the iMac Pro because it had more ports, SD card slot, and what features you like or dislike. This is a great chance to give Apple feedback! pic.twitter.com/igU25cH6ss — a f waller (@afwaller) September 10, 2018

Apple regularly sends out surveys of this nature to customers, but this line of questioning on the iMac Pro suggests Apple is perhaps trying to suss out key features that pro-level users want to see in future pro machines, such as the Mac Pro machine that's in the works.

The iMac Pro was a precursor to a new Mac Pro, which Apple first announced in April 2017. Apple is working on a high-end high-throughput modular Mac Pro that will facilitate regular upgrades to meet the needs of Apple's pro user base.

Apple has a dedicated team working on the Mac Pro, and Apple executives have said that Apple is committed to making the machine the highest-end desktop system able to handle VR and high-end cinema production. Apple has even put together a "Pro Workflow Team" to tailor the Mac Pro and other Apple products to professional users, and that team could potentially be behind the iMac Pro survey.

Phil Schiller and Craig Federighi admitted last year that with the 2013 Mac Pro, Apple designed itself into "a bit of a thermal corner" given the restrictive size of the trash can-shaped Mac Pro and its inability to handle the thermal capacity needed for larger single GPUs. Apple learned from that mistake and is this time aiming for a machine that will better accommodate future upgrades and high-end hardware.

Apple plans to release the new Mac Pro at some point in 2019, so a launch is a ways off, but it's possible Apple will be ready to share additional details about the machine this year when new Macs are unveiled either in September or October.

keysofanxiety
Can’t win huh. Ask the customers what they want or their favourite features of the iMac Pro and Apple are clueless with what direction to go.

Take a different direction and get criticised and Apple are accused of being arrogant and don’t listen to customers.

Look, Apple ****ed up badly on the Pro market. They admitted it. They’re looking to rectify it. Why does everybody have to be some damn negative about every bit of news. If Pros (pretty much everybody here, evidently), are so invested in Apple products and its ecosystem, can’t you be happy they’re genuinely looking to resolve your criticisms?
Score: 44 Votes (Like | Disagree)

Forget thinness. This isn't the same market that is looking at the new iPhone or iPad. It is a pro machine. Sure they'll buy those too, but this is for development or graphic design and the like where thinness is irrelevant.
Score: 31 Votes (Like | Disagree)

nvmls
Way to play dumb Apple. Surely glue will be the most popular.
Score: 28 Votes (Like | Disagree)

zubikov
Apple didn't get to where it is by asking its customers what they want. This is worrying.
Score: 26 Votes (Like | Disagree)

Apple didn't get to where it is by asking its customers what they want. This is worrying.

The time to worry was seven years ago, when the guy who knew what customers really needed died.

Apple has just been guessing ever since.
Score: 24 Votes (Like | Disagree)
Read All Comments