Netflix Tests Disabling In-App Subscriptions on iOS in Some Countries

Netflix is already one of the highest grossing apps on the App Store, as many iPhone and iPad users pay for their subscriptions via iTunes/Apple ID billing, but the streaming video platform wants an even bigger piece of the pie. 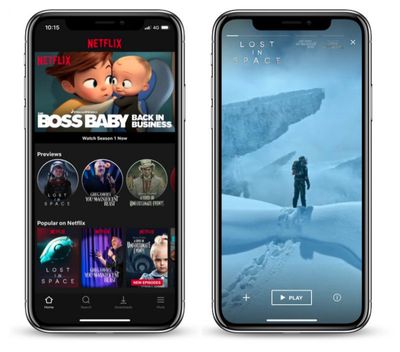 TechCrunch today reported that, until September 30, new or lapsed subscribers in some 33 countries will be unable to pay using iTunes.

A customer service representative for Netflix confirmed the test with TechCrunch:

During this time, customers in these countries may experience any of the following when launching the Netflix app on an iOS (mobile or tablet) device:

We are constantly innovating and testing new signup approaches on different platforms to better understand what our members like. Based on what we learn, we work to improve the Netflix experience for members everywhere.

This means that some iPhone and iPad users who open the Netflix app will only be able to sign into an existing, active account, with no option to create a new account. By the sound of it, Netflix is hoping that these users will close the app, and sign up through its mobile website or elsewhere with a credit card.

Apple collects a 30 percent commission—15 percent after the first year—from users who subscribe via its in-app purchase mechanism, so it's pretty clear that Netflix is trying to avoid padding the pockets of one of its biggest competitors, which just so happens to be working on a Netflix-like service itself.

Of note, Apple's App Store Review Guidelines state that developers are not permitted to "directly or indirectly target iOS users to use a purchasing method other than in-app purchase," but it appears that Netflix has worked around this rule by simply not offering new users the option to sign up in-app whatsoever.

Lmao, right. I promise you most people don’t subscribe to Netflix through iTunes. Nobody who wants to subscribe to Netflix will avoid doing it because you can’t do it through iTunes, if you think that’s the case you’re living in your own little universe. The only one who will lose out is Apple, losing out on fees they aren’t entitled to anyway and should have never received.
Score: 41 Votes (Like | Disagree)

LordVic
I can sortof understand Apple charging ~30% for purchasing an app on their store. They host the App afterall.

But taking 15% from subscriptions? 30% from in-app purchases that have absolutely NOTHING to do with Apple except using them as a payment processor is ridiculously high for a payment processor. MasterCard/Visa charges 1-2% of each purchase. Even your run of the mill non standard ones only charge 2-3%. Taking 15% of monthly subscription based services is very high and puts unecessary burdens on those companies.

Apple needs to adjust here to remain competitive. services like Netflix are already small margin and are fairly inexpensive. 15% of your fee can suddenly make the service unprofitable to deliver, and if that's the case, we al lose as the services that aren't profitable go away, even if they're great like Netflix.

Do we WANT Netflix to stop being used on iOS devices? do we want them to just say "it's not worth it" and walk away? of course not. That hurts everyone. Apple needs to realize this isn't 2010 anymore. they no longer have a captive position as the dominant platform.
Score: 31 Votes (Like | Disagree)

Moorepheus
can't say I blame them. Audible has never allowed you to buy from the app for anything. Why would any company want to lose out on 15% of revenue?
Score: 24 Votes (Like | Disagree)

Your move, Apple. Take Netflix down from their App Store maybe? :D

Why? People aren’t subscribing to Netflix because of Apple.
[doublepost=1534862090][/doublepost]

Meh, it’s really easy to subscribe from the browser. That’s what I did when I had a Spotify subscription.
[doublepost=1534862216][/doublepost]

can't say I blame them. Audible has never allowed you to buy from the app for anything. Why would any company want to lose out on 15% of revenue?

Barnes and Noble doesn’t either. Doesn’t stop me from buying books on bn.com. Why should Apple get a cut of B&N book sales? Just because they offer their own book service? I assumed the yearly developer fee is to cover the cost of Apple hosting a free app on the App Store.
Score: 17 Votes (Like | Disagree)

Rigby
The little angel on my left shoulder says "Netflix deserves to get the full price". The little devil on the right shoulder says "but you can save 15-20% by using discounted iTunes gift cards". And there is faint laughter in the distance that sounds like Tim Cook.
Score: 15 Votes (Like | Disagree)

how so? Giving Apple 30% is massive chunk and I never used in app purchases for subscription and this will certainly not deter people from using netflix. After all, you only need to subscribe once and please don't tell me people are so damn lazy these days to go on a website and do it from there.

I can safely say that those lazy slackers will still amount for less revenue lost than the 30% Apple is taking right now.

So Netflix sacrifices user experience for their greed.

really? How often do you use this "feature"? I would rather that Netflix uses the extra 30% to improve the film collection and services then lose a massive chunk of money because people are so damn lazy these days
Score: 14 Votes (Like | Disagree)
Read All Comments