Yesterday afternoon, first responders were called to an Apple Store in Amsterdam, reportedly due to a leaking iPad battery on the premise. Apple has since confirmed that it is investigating the incident, but ensures that the store has been declared safe, and that there were no injuries of any kind reported. 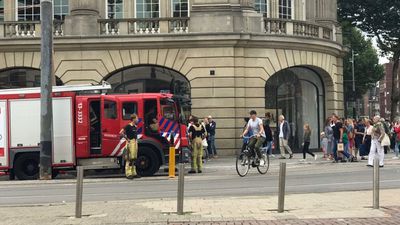 Image Credit: AS Media
MacRumors received the following statement from an Apple spokesperson:

We're currently investigating the incident that took place at Apple Amsterdam on Sunday. Our staff were able to evacuate customers quickly and safely and the store re-opened shortly afterwards.

Apple says no customers were impacted, nor did any employees end up requiring any medical attention. The local fire department and medical professionals were alerted as a precautionary measure only. Apple says the fire department declared the store and damaged device, safe, shortly afterwards.

At 2:20 p.m. local time on Sunday, the Amsterdam fire department had tweeted that crews were on the scene. The tweet confirmed there was "no smoke" at the store, but three people with possible respiratory issues.

A spokesperson for the fire department cited a "leaking battery pack" as the probable cause of the incident, which reportedly caused panic among customers more than anything. It was an unfortunate situation, for sure, but headlines claiming an iPad battery exploded or burst into smoke and flames are inaccurate.

Our understanding, based on an anonymous but corroborated tip, is that a damaged iPad was sitting on a shelf in a back room, in a queue of devices to be repaired by Genius Bar technicians. At some point, employees noticed that the iPad's battery was leaking, and took the same precautionary measures as any thermal event.

The fire department reportedly aired out the store by around 3:00 p.m. local time, after which time it re-opened for business as usual.

vegetassj4
Now they are finally catching up with Samsung.....

Anyone would automatically pair this to Samsung, but separate incidences..

Still ,it happens. QA testing gone down... Think there is a decrease for sure. There's defiantly more problems across the board.

How has QA testing “gone down,” especially with respect to this incident. Be specific.
Score: 4 Votes (Like | Disagree)

mytdave
Just wow. Talk about the litigious-ation and wussification of the world... Back in the day, if we found a leaking battery, we'd remove it and toss it in the trash can (which used to be metal and non-flammable). Look at how far we've come! (not)
Score: 3 Votes (Like | Disagree)

It EXPLODED, released chemicals in the air, few are being treated for minor injuries. You can like Apple products but no need play down.

Dutch site.
https://www.onemorething.nl/2018/08/incident-apple-store-amsterdam/
It did not explode.
Score: 3 Votes (Like | Disagree)

Just wow. Talk about the litigious-ation and wussification of the world... Back in the day, if we found a leaking battery, we'd remove it and toss it in the trash can (which used to be metal and non-flammable). Look at how far we've come! (not)

Yeah back then we were also removing asbestos without face masks....
Score: 2 Votes (Like | Disagree)

TheHorrorNerd
iPads are never repaired, only replaced. (In store)
I guarantee it was not in any “repair queue”.
If anything it was in a shipping box in the warehouse.
Also these thermal events from batteries are almost always 3rd party batteries installed by unauthorized service providers.
Score: 2 Votes (Like | Disagree)
Read All Comments

Sunday January 23, 2022 2:59 am PST by Tim Hardwick
Apple has always emphasized the depth of thought that goes into the design of its products. In the foreword to Designed by Apple in California, a photo book released by the company in 2016, Jony Ive explains how Apple strives "to define objects that appear effortless" and "so simple, coherent and inevitable that there could be no rational alternative." But every once in a while even Apple...
Read Full Article • 441 comments