Toyota has confirmed on its website that CarPlay is a standard feature in all 2019 Sienna models sold in the United States. This is the first model year of the Sienna equipped with Apple's in-car software platform. 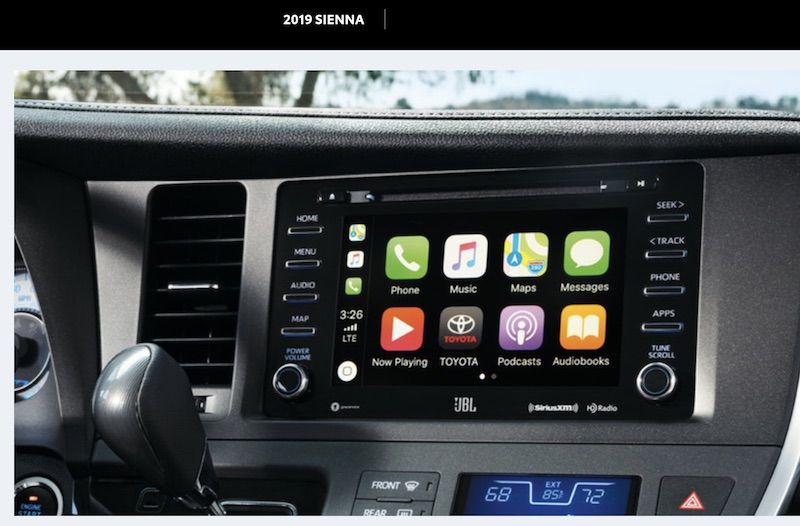 LE, SE, and XLE trims of the 2019 Sienna all feature a seven-inch touchscreen display on the dashboard with Toyota's custom Entune 3.0 infotainment system, through which CarPlay can be accessed. Amazon Alexa and Siri Eyes Free are also supported, but like other Toyota vehicles, there is no Android Auto.

Toyota's other CarPlay-equipped vehicles include the 2019 Avalon, 2019 Corolla Hatchback, 2019 RAV4, and the 2019 CH-R. It's also likely that the 2019 Camry, which also has the Entune 3.0 system, will support CarPlay, but Toyota's website still lists the 2018 model, and a spokesperson would not confirm.

Toyota and its premium brand Lexus were among the last major automakers to begin offering CarPlay earlier this year. On the Lexus front, CarPlay-equipped models include 2019 model years of the ES, LC, LS, RC, and UX.

Toyota and Lexus have deployed a wired implementation of CarPlay, meaning that an iPhone must be connected to the system with a Lightning cable to access a wide variety of apps from the dashboard display, including Phone, Messages, Apple Maps, Apple Music, Spotify, and starting with iOS 12, Google Maps and Waze.

The 2019 Sienna goes on sale this fall at dealerships in the United States, with a suggested starting price of $31,115.

magicschoolbus
So glad Toyota is going with Carplay and not that terrible EnTune system anymore. Yuck.
Rating: 4 Votes

Waiting for the Tacoma to get CarPlay. Dealer told me 2020 was his thought, but it was just a guess.


I’m not in the market for a new Taco (yet), but I sure as hell won’t be buying a new one until they include CarPlay.
Rating: 1 Votes

unr1
What about Camry lol

They were so stubborn and now they are giving in one by one.
Oh, and I’m looking at you too Mazda
Rating: 1 Votes

If you read, you'll see that they are still using horrible EnTune but just adding CarPlay. Sh*t EnTune still exists.

Phogro
Waiting for the Tacoma to get CarPlay. Dealer told me 2020 was his thought, but it was just a guess.
Rating: 1 Votes
[ Read All Comments ]