An estimated 31 percent of iPhone users have made a purchase with Apple Pay in the past year, up from 25 percent a year ago, according to a new Apple Pay estimates shared today by Loup Ventures analyst Gene Munster.

Apple Pay now has an estimated 252 million users, equating to 31 percent of the active installed iPhone base, according to Munster. 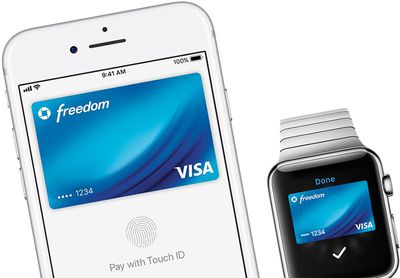 Apple does not provide official details on how many people use Apple Pay, but in a recent earnings call, Apple CEO Tim Cook said that there were upwards of 1 billion Apple Pay transactions in Q3 2018, triple the amount from a year ago.

Based on these figures combined with past Apple reports of yearly Apple Pay growth, Munster expects transaction growth of 200 percent over the course of the next 12 months.

Bank adoption of Apple Pay is also growing steadily, and during the same earnings call, Apple announced that 4,900 banks support the feature. The number of banks supporting Apple Pay has increased by 1,701 since the December quarter, marking a 55 percent growth in North America, 141 percent in Asia, and 370 percent in Europe.

Munster believes that just 20 percent of global smartphone users use their phone as a wallet, a number that he expects to rise to 80 percent in the future.

Apple is well-poised to position the iPhone as the premium digital wallet on the market given that it's the only digital wallet option "with all five payment pillars" defined as mobile, desktop, in-app, peer to peer, and point of sale.

Munster says Apple Pay is much more popular overseas, with 85 percent of users being international compared to 15 percent in the United States. Apple Pay is estimated to have 38 million users in the U.S. and 215 million in the 20+ other countries where Apple Pay is available.

Apple Pay works in retail locations with the Apple Watch and iPhone, and in apps and on the web with iPhone, iPad, and Mac. As of iOS 11.3, Apple also supports Apple Pay Cash payments, a feature that is currently limited to the United States.

Shanghaichica
That’s great especially considering that there are a lot of places it’s not available yet.

I use Apple Pay all the time. Almost everyday.
Score: 10 Votes (Like | Disagree)

MadeByApple
I hate that how peer to peer is set up. Using iMessage doesn’t feel like the best approach.

I wish there was a way to open the wallet app and send money through the wallet. It would be cool to have it set up like AirDrop.

AirDrop cash to each other would be nice.
Score: 9 Votes (Like | Disagree)

I just need Target & Chipotle to support it in-store.

I think Target and Walmart are going to hold out since they want all your data.

Costco now accepts it! Just did it for the first time yesterday.
Score: 8 Votes (Like | Disagree)

Sunday February 5, 2023 6:06 am PST by Hartley Charlton
A new version of the Mac Studio with the "M2 Ultra" chip is unlikely to arrive in the near future, according to Bloomberg's Mark Gurman. In the latest edition of his "Power On" newsletter, Gurman explained that since the upcoming Apple silicon Mac Pro is "very similar in functionality to the Mac Studio," Apple may wait until the release of M3- or M4-series chips to update the machine, or...
Read Full Article • 480 comments