LinkedIn has introduced a new voice messaging service that's built in to the latest version of its mobile app.

Called LinkedIn Messaging, the feature gives users the ability to record and send audio messages up to one minute long. 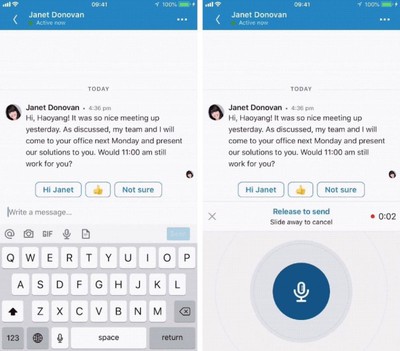 Voice messaging is rolling out now in the LinkedIn app on iOS and Android, and you can receive voice messages on mobile and on web. This feature will be available globally to all members in the next few weeks.

We hope this makes it easier than ever to communicate when you want, how you want with your professional community.

Voice messages are recorded by tapping the microphone icon on the mobile messaging keyboard. Users then tap and hold the microphone symbol in the circle to record their voice message and release their finger to send.

The business networking platform is touting voice messages as an easier way to communicate when you're on the go or multi-tasking, but many account holders will likely be wary of the feature given the already high volume of unsolicited messages sent over LinkedIn.

LinkedIn is a free download for iPhone available on the App Store. [Direct Link]

McG2k1
The only use I’ve ever found for LinkedIn is looking up the name of some person I worked with one time long ago.
Score: 4 Votes (Like | Disagree)

yanksfan114
Oh god, now I’m gonna have recruiters voice spamming me instead of regular InMailing me. Thanks LinkedIn!
Score: 3 Votes (Like | Disagree)

caskin8a
It’s kind of amazing just how out of touch with their customer base whoever approved this is.
Score: 2 Votes (Like | Disagree)

OldSchoolMacGuy
Another feature people won't use.

LinkedIn has lagged WAY behind the rest for years. Recently they've tried adding a bunch of features but many aren't things people will actually use. Instead of focusing on the advertising options (which they're at least 5+ years behind Facebook, Twitter, & Instagram on), they're putting their efforts into weird stuff like this.
Score: 1 Votes (Like | Disagree)

Sammio2
Immediate disable... if I can?
Score: 1 Votes (Like | Disagree)
Read All Comments