Apple today updated its investor relations page to announce that it will share its earnings results for the third fiscal quarter (second calendar quarter) of 2018 on Tuesday, July 31.

The earnings release will provide a look at continued sales of the iPhone X, iPhone 8, and iPhone 8 Plus, along with data on how well the new low-cost 9.7-inch iPad is doing. 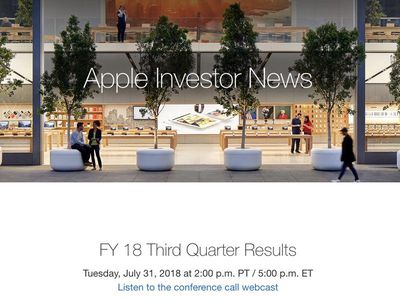 Apple's guidance for the third fiscal quarter includes expected revenue of $51.5 to $53.5 billion and gross margin between 38 and 38.5 percent. Based on those guidance numbers, Apple will beat its Q3 2017 earnings results.

"More iPhones. Less Macs. Profits up. We're not going to tell you about Watch, or Beats sales. Please enjoy our bizarre reason the Homepod is considered a success. Also, don't ask about the AirPower. Now watch as our stock price SOARS!"
Score: 3 Votes (Like | Disagree)

Those days where Apple proves the “poundits” in the media, the WallSt. ANALysts and general Apple haters are WRONG.

"More iPhones. Less Macs. Profits up. We're not going to tell you about Watch, or Beats sales. Please enjoy our bizarre reason the Homepod is considered a success. Also, don't ask about the AirPower. Now watch as our stock price SOARS!"

Yes, predictable Cook, keeping the biggest company in the world by market capitalizon that way for almost a decade, the good “predictable” in my book.

And contrary to the "other ones": Microsoft, Google and Amazon, specially Amazon, they didn't do it with speculation, they aren't a bubble, they don't have astronomical P/Es, it's not a "promising company", it's a "delivering it right here, right now company".

All that without updating the Mac mini, imagine if they updated the Mac mini.
Score: 3 Votes (Like | Disagree)

DocMultimedia
Bring it on. My AAPL is hopeful.
Score: 2 Votes (Like | Disagree)

You heard it here first people!
Score: 1 Votes (Like | Disagree)

Bring it on. My APPL is hopeful.

Hope you bought the right stock. The ticker symbol APPL was for a shipping company that is now bankrupt and delisted.
Score: 1 Votes (Like | Disagree)