There are two new Drummers that offer Roots and Jazz-influenced brush styles, along with 1,000 new electronic and urban loops that cover genres like Reggaeton, Future Bass, and Chill Rap. 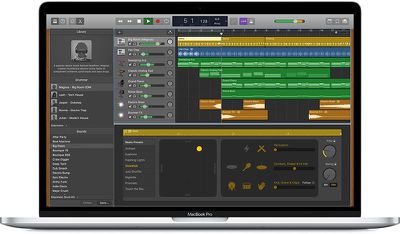 Apple says that it has added more than 400 animal, machine, and voice sound effects that can be worked into music creations, and there are also free downloadable Artist Lessons.

The new Artist Lessons are designed to teach users how to play hit songs on piano and guitar, and are taught by the artists that made the songs famous.

This is the first major update to GarageBand for Mac in a year. The last update, 10.2, was introduced in June 2017 and brought new Drummers along with support for the Touch Bar on the MacBook Pro.

Since April 2017, the GarageBand apps for both iOS and Mac have been available to download for free. You can get the new version of GarageBand for Mac from the Mac App Store. [Direct Link]

jayducharme
I got the FCPX update, but the GB update still isn't showing up. I agree that GB is from a legacy time when Apple was giving people a stronger reason to switch to Mac. But I'm glad it's still included and I know a few people who have purchased their first Mac specifically because of GB.
Score: 5 Votes (Like | Disagree)

I’m surprised (but glad) Apple haven’t dropped GarageBand, it seems very much a legacy of what Apple was about 10 years ago, not where it seems to be going now.

GarageBand is almost like a reskinned version of Logic Pro X to make it easier to use. As long as LPX is updated, I expect GB to stick around.

It is a great piece of software if you want no hassle multitrack recording.
Score: 3 Votes (Like | Disagree)

Wheat Wiliams
GarageBand 10.3 is unusable. It's introduced a serious bug.

GarageBand 10.3.0 has broken support for third-party AU virtual instruments. First it puts up an error message saying that you have to choose to reduce macOS security in your System Preferences to use a certain third-party AU plugin.

Then after you do that, it gives you an error message saying "Audio Unit plug-in can't be used. The Audio Unit could not be loaded for your project, and may need to be updated. Contact the manufacturer for an updated version or further assistance."

I have had this problem with 64-bit, up-to-date plugins that work just fine with no problem in MainStage 3.3.2 and other apps that use Audio Units. So the problem is with GarageBand 10.3.0.

I had no choice but to revert to GarageBand 10.2 from a backup so that I can keep working with my AU instruments.
Score: 3 Votes (Like | Disagree)

NightFox
I’m surprised (but glad) Apple haven’t dropped GarageBand, it seems very much a legacy of what Apple was about 10 years ago, not where it seems to be going now.
Score: 3 Votes (Like | Disagree)

Ah... the 1GB+ app that I've removed a long time ago. I quite enjoy not having to update it to :p

The app you chose to install in the first place. What a pointless comment. :rolleyes:

BornAgainMac
This is great but I would like to see Podcast creation added back in someday.
Score: 2 Votes (Like | Disagree)
Read All Comments