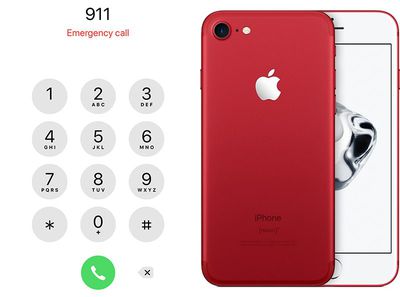 The new functionality will be powered by RapidSOS's IP-based data pipeline, which will quickly and securely provide 911 call centers with Hybridized Emergency Location data, which is determined based on proximity to cell towers and Wi-Fi access points, and on-device data sources like assisted GPS.

Apple said the location data will only be used for emergency purposes, and only accessible to responding dispatch centers during 911 calls.

"Communities rely on 911 centers in an emergency, and we believe they should have the best available technology at their disposal," said Apple CEO Tim Cook, in a prepared statement. "When every moment counts, these tools will help first responders reach our customers when they most need assistance."

The current 911 system, developed by AT&T in the 1960s, was intended for landline phones, which have fixed addresses. Apple notes that approximately 80 percent of 911 calls today come from mobile devices, however, and most dispatching systems can only obtain their estimated location based on cell towers.

RapidSOS's system, which will be integrated with existing software at 911 centers, should help solve this problem. The modern technology is part of a broader initiative known as Next Generation 911.

As many as 10,000 lives could be saved each year if 911 emergency dispatchers were able to get to callers just one minute faster, according to the FCC. Whether someone is experiencing cardiac arrest, or a house is on a fire, it is obviously critical for first responders to arrive as quickly as possible.

"This new functionality is an example of how companies and first responders can use technology to dramatically improve public safety," said former FCC Chairman Tom Wheeler. "Lives will be saved thanks to this effort by Apple and RapidSOS."

The feature is somewhat similar to Advanced Mobile Location, implemented in iOS 11.3 in a handful of European countries.

Advanced Mobile Location recognizes when an emergency call is made and, if not already activated, activates an iPhone's GPS or Wi-Fi to collect the caller's precise location information. The device then sends an automatic SMS to the emergency services with the caller's location, before turning the GPS off again.

Advanced Mobile Location must be supported by carriers. As of earlier this year, the service was fully operational in many European countries, including the United Kingdom, Estonia, Lithuania, Austria, and Iceland, as well as New Zealand.

Apple says the RapidSOS functionality will be limited to the iPhone for now, ruling out the Apple Watch and other devices at launch.

Apple's announcement coincides with the annual NENA Conference & Expo in Nashville this week, focused on the future of the 911 system.

"It can be hard in an emergency to know exactly where you are, and if you’re not on a landline, our first responders can't always help. This upgrade will save lives by giving our 911 dispatchers, police, firefighters and paramedics the thing they need the most: time," said Nashville Mayor David Briley.

rjtyork
It’s fascinating to me watching tech evolve to save more and more lives. I work for Vivint and one of my customers told me about a fire they had and their SmartHome turned off the AC, unlocked the doors, and sent the fire department all in under 1 minute while she gathered her family and pets and got out of the house. Just as she pulled out her cellphone to finally call the fire department herself, they were turning down her street and they put the fire out and saved most of the house. Turning off the AC helped smother the fire, unlocking the front door shaved a few valuable seconds off their escape, and having the fire department there a whole 4 minutes earlier saved some very valuable family photos and scrapbooks that she wasn’t able to go back in to get. This world and the human race is amazing. I’m excited to see what else technology is going to do for us
Score: 45 Votes (Like | Disagree)

And the user will be able to turn this off, if desired. Is this correct, dear apple ?

Hopefully not. Of course you have the option of NOT dialing 911.
Score: 41 Votes (Like | Disagree)

You know those investigation departments.

not that it bothers me (I don’t answer withheld numbers or ones I don’t know) but it’s something that sprang to mind.

Don't think it will work that way, it works by calling the emergency number, not the other way around.

No. The technology is dormant on the smartphone and the location sources (either GPS or Wi-Fi) is only activated when the emergency call is made. It is turned off directly afterwards and therefore is not active during normal times. Android do not store any location data and simply pass it through the mobile network operator to the PSAP.

How long till people complain of this great feature? I mean Americans seem to be a bit paranoid about sharing their locations?

So I guess when people want to report a crime and remain anonymous they won’t be able too. So they’ll report less crimes and then the governments can publish nice reports showing how crimes have gone down.

But even without GPS they have your phone number and by checking the cell you were connected to they could already have an estimation of your position. And I don't know how it works on the US, but carriers need a copy of my ID and social security number when they give me a sim card in my country, so they know who I am just looking at the phone number
If your goal is to be anonymous you don't call 911 with your own phone
Score: 14 Votes (Like | Disagree)

Hoping there will be the ability to turn this feature off.

"Please, come quick, my house is on fire and I'm trapped inside it with my family"
"What's the address?"
"I'd rather not say"

"I need the police, there's a guy running round with a gun"
"What's your location?"
"Ha, nice try! You don't catch me out that easy though!"