Apple's personal assistant Siri has been updated with support for sports ahead of the World Cup in Brazil, Russia, Denmark, Finland, Malaysia, Turkey, Saudi Arabia, and Israel, Apple announced today.

Sports support for Siri in the nine new countries expands Siri sports information to a total of 35 countries, including the United States. 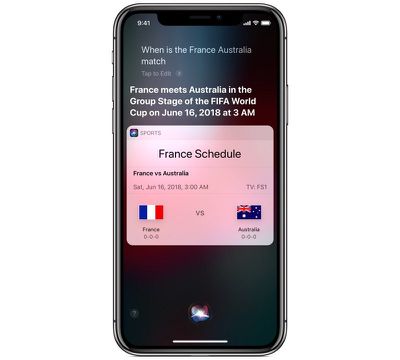 In addition to expanding Siri sports support, Apple also plans to highlight football (soccer in the United States) apps and games throughout the month. Features will include tips on taking the perfect football photo and how to "get your football fix" on social media. Highlighted apps will include FOX NOW and BBC Sport, while featured games will include FIFA Mobile and PES 2018.

The TV app on Apple TV and iOS devices will feature World Cup coverage via FOX NOW in the United States and TSN and RDS in Canada, with fans able to follow their favorite teams through the TV app's Up Next feature.

Apple also plans to feature World Cup content in the News app through Eight by Eight magazine, and in Apple Music with featured playlists for each of the 32 participating nations.

Podcasts will include a "The Beautiful Game" World Cup editorial collection, as will iBooks, with Apple highlighting World Cup-related podcasts and book selections.

The 2018 FIFA World Cup kicks off later this week on June 14 and lasts through July 15.

Spendlove
"Hey Siri, will England go out on penalties after another plucky but futile tournament?"
Score: 12 Votes (Like | Disagree)

* When does France play Australia?
* What teams are in group A?
* Who is on the England squad?
* Who won the Argentina-Iceland match?"

Why is this a thing? I ask with a slight bit of snark, but a whole lot of curiosity, and a crap ton of why the hell would you announce this? I honestly don't know if Google and Amazon have to "update" their respective knowledge bases for Assistant and Alexa in a similar fashion, but I seriously doubt it. Even if they had to do the exact same thing, at least they were smart enough not to advertise that fact. It makes Siri seem as if it has to be spoon-fed special knowledge just to appear smart. Not a good look imo.
Score: 7 Votes (Like | Disagree)

GadgetBen
The 'World Cup'. It actually includes other Countries from around the World America!
Score: 6 Votes (Like | Disagree)

Should probably add that this is the Men's Soccer World Championship to make it clearer to all. I don't see Team USA amongst the roster of nations, which seems strange.

jdawgnoonan
Siri is obviously not truly AI if every time she will have knowledge of some new thing it requires a press release. If she is truly an AI platform she would pull this "Knowledge" from the web just like she should pull other knowledge. What this tells me is that Siri is a long ways from catching up with Google Assistant.
Score: 3 Votes (Like | Disagree)