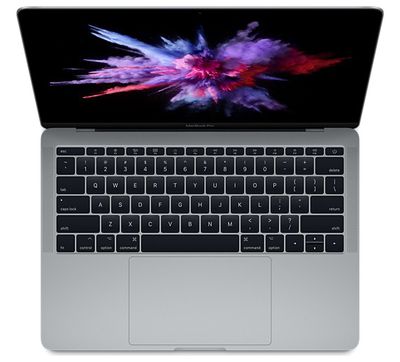 Namely, when either the MacBook Pro's solid state drive or main logic board experiences failure, both need to be replaced simultaneously. Apple's memo doesn't specify an underlying reason as to why both components may fail in tandem, or what percentage of units may be at risk of being affected.

An excerpt from the document, obtained by MacRumors from a reliable source:

Apple has identified a specific population of MacBook Pro (13-inch, 2017, Two Thunderbolt 3 Ports) units requiring both solid state drives and the main logic board to be replaced when either has a functional failure.

A message will appear when either the solid state drive or the main logic board part number is added to the repair of an identified MacBook Pro system. The message will indicate both the SSD and MLB must be replaced when either component has a functional failure.

For clarity, this refers to the 2017 model year 13-inch MacBook Pro with a standard row of physical function keys rather than a Touch Bar. Apple says the issue does not affect any other MacBook Pro models with or without the Touch Bar, including those released in 2016, according to the memo.

Apple says the dual SSD-logic board replacement is not required for unrelated issues, such as a cracked display or an unresponsive trackpad.

Apple appears to have authorized free repairs for this issue, in or out of warranty. If there is liquid damage or accidental damage, however, out-of-warranty fees may apply. Apple quotes a turnaround time of roughly five to seven days.

To initiate a repair, visit the Get Support page on Apple's website and select "Mac" → "Mac notebooks" → "Hardware Issues" → "The topic is not listed," explain the issue, and select continue. Then, select "Bring in for Repair" to schedule an appointment with an Apple Authorized Service Provider or Genius Bar.

There are also options to contact Apple's support advisors by phone or online chat to initiate a mail-in repair in select countries.

This issue could explain why the 13-inch MacBook Pro with function keys temporarily faced extended shipping estimates on Apple's online store last month, as Apple may have implemented a fix, although the brief shortage could have been purely coincidental. We've reached out to Apple for comment on the matter.

maflynn
So Apple finds a defect but will charge people who's warranty has expired?
Score: 28 Votes (Like | Disagree)

jhearty99
How could Apple identify and acknowledge this issue on 'limited MacBook Pros' and then say out-of-warranty fees may apply? Not a good look
Score: 18 Votes (Like | Disagree)

zoomp
So, what happens if we get this out of warraty period? Why don’t they issue a recall... this seems pretty serious enough. So, if my SSD fails out of warraty period, Do I have to pay for a new motherboard that was not damaged by my use? Makes little sense to me.
Score: 14 Votes (Like | Disagree)

baryon
Good luck fixing these once your (usually 1 year) warranty expires. "Oh your SSD failed? Time to replace both your SSD and the entire logic board! You bet it's going to cost a lot!".
Score: 10 Votes (Like | Disagree)

vseera
Apple has always been a company that charges more for their products. Some have criticised this but most of their customers (including me) have been happy paying more knowing that we will be taken care of if there is a problem, due to the legendary Apple support.

I hate to be the guy who brings up Steve Jobs, but the reason why Apple is a reliable trusted brand today is because he implemented this. He charged an amount which was much higher than the industry but then took care of all of his customers. I remember my friend had a few issues with his MacBook Pro 15 back in the day and after the third issue in a year, the Genius handling it straight up replaced the whole machine with the latest model.

If Tim Cook started Apple, it would probably be a very profitable company but it would nowhere stand for the reliability the Apple brand stands for.

Instead of acknowledging the mistake and promising free repairs on ALL machines affected, regardless of warranty status, they pull this crap. Unfortunately, it's the same for iPhone repairs, Mac repairs, etc.

I really hate this new direction Apple is heading in, where the reliability of their products is poor and the customer service is getting worse. Profits are going up I guess and by the time people wise up, Tim Cook will probably retire.
Score: 10 Votes (Like | Disagree)

This isn’t some big thing.