Apple today announced tvOS 12, which will introduce support for Dolby Atmos surround sound technology in the Apple TV 4K. When the update appears later in the year, iTunes will automatically update compatible movies with Dolby Atmos support for free.

With the addition of Dolby Atmos, Apple said that this makes the Apple TV 4K the only streaming box with support for both 4K and Atmos. Additionally, iTunes will become the "home to the largest collection of Dolby Atmos-supported movies anywhere" after the update.

Apple also reiterated the Apple TV as a game-changer for the television market, announcing that cable company Charter Communications will begin offering the Apple TV 4K to its customers this year (in a similar vein to promotions from DirecTV Now). Secondly, customers will have access to live channels and thousands of on-demand programs through a new Spectrum TV app on tvOS and iOS.

Apple is upgrading Single sign-on for Apple TV and iOS with "zero sign-on," wherein the Apple TV detects the user's broadband network and automatically signs them in to "all the supported apps they receive through their subscription - no typing required." Zero sign-on support will launch with Charter in 2018 and roll out to other providers "over time."

The company is also upgrading Aerial screensavers in tvOS 12 with new Earth footage captured in collaboration with the International Space Station National Lab and the Center for the Advancement of Science in Space. The screensavers have been taken by NASA astronauts and filmed in 4K HDR, and all Apple TV Aerial screensavers will now be more interactive with location information and swipe-to-change features through the Siri Remote.

A few other tvOS 12 updates include:

- With iOS 12, users can securely AutoFill passwords from iPhone and iPad to Apple TV to easily sign in to Apple TV apps.
- The Apple TV Remote will be automatically added to Control Center on iPhone or iPad for Apple TV users, giving users quick access to Apple TV controls.
- Home control systems like Control4, Crestron and Savant can be used to control Apple TV, including using Siri for voice search and control.

tvOS 12 will launch for all users as a free software update for the 4th generation Apple TV and Apple TV 4K in fall 2018.

Exactly what I was thinking and the presenter presented well. Unlike some of the others.
Score: 5 Votes (Like | Disagree)

edw79
BTW, the claim that ATV will be the only streaming box with Atmos and HDR is not true, the FireTV does it now.One would have to rewatch the Keynote to be sure, but I believe they said it is the only one to be certified Dolby Vision and Dolby Atmos. The FireTV is certified for HDR 10, but not Dolby Vison. But my memory could be wrong. 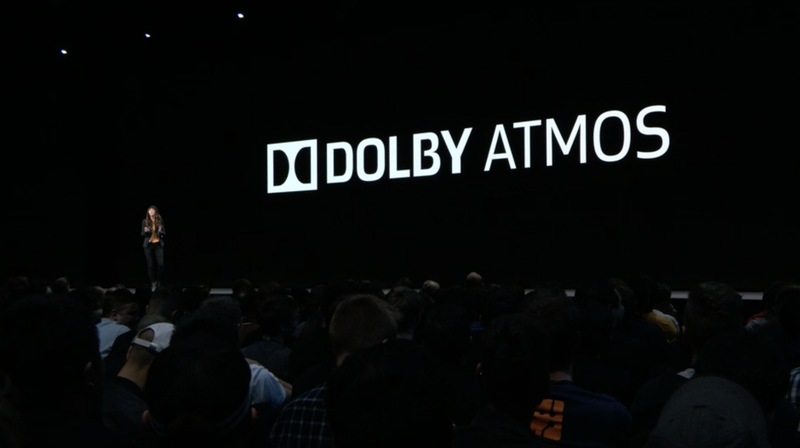 With the addition of Dolby Atmos, Apple said that this makes the Apple TV 4K the only streaming box with support for both 4K and Atmos.

Other features coming to tVOS include "Zero Sign-on," so that if you're on your TV provider's broadband network, Apple will securely unlock all apps connected to a subscription service.

For the Apple TV's Aerial screensavers, you'll be able to tap to see descriptions of where each video was shot, and can swipe between screensavers. There will also be new Aerials of Earth taken from the International Space Station.

I was hoping for Philips hue sync for the Apple TV maybe next year
Score: 4 Votes (Like | Disagree)

Netflix already has some Atmos offerings though not many. VUDU also offers Atmos titles in their rentals. I think I saw something on Amazon that had Atmos but can't remember for sure. Like you, I wish there were more offerings.

BTW, the claim that ATV will be the only streaming box with Atmos and HDR is not true, the FireTV does it now.

They specifically said Dolby Vision HDR because the vast majority of STB’s do not support Dolby Vision (because it costs extra to license), only HDR10 (which is free).

Whoever wrote the MR article misquoted, it should say Dolby vision and Atmos not 4K and Atmos
Score: 4 Votes (Like | Disagree)

RamGuy
Dolby Atmos is great and all. But until services like Netflix, Amazon Prime etc starts offering TV-shows and Movies with Dolby Atmos (they are mostly offering Dolby Stereo and Dolby Digital Plus) I won't really benefit anytime soon.

Sonos is also going to announce something new for the living room in two days and I'm eager to see if that might be a new sound bar solution offering Dolby Atmos. It would be the perfect timing.
Score: 3 Votes (Like | Disagree)
Read All Comments

Saturday January 23, 2021 2:42 pm PST by Joe Rossignol
Since the launch of iPhone 12 models in October, Apple has acknowledged that the devices may cause electromagnetic interference with medical devices like pacemakers and defibrillators, but the company has now shared additional information. Apple added the following paragraph to a related support document today:Medical devices such as implanted pacemakers and defibrillators might contain...
Read Full Article • 96 comments

Friday January 22, 2021 7:50 am PST by Joe Rossignol
Last week, reputable analyst Ming-Chi Kuo outlined his expectations for new 14-inch and 16-inch MacBook Pro models later this year, including the return of the MagSafe charging connector, the removal of the Touch Bar, a new flat-edged design, and the return of more ports built into the notebooks for expanded connectivity. A concept of a modern MacBook Pro with an SD card reader Kuo did not...
Read Full Article • 497 comments

Saturday January 23, 2021 11:02 am PST by Frank McShan
Microsoft yesterday shared a new ad on YouTube titled "Microsoft Surface Pro 7: The Better Choice," in which the company compares its tablet computer to Apple's 13-inch M1 MacBook Pro, as spotted by MSPoweruser. The ad highlights the Surface Pro 7's touchscreen and included stylus as opposed to only a "little bar" (the Touch Bar) on the MacBook Pro. Other advantages of the Surface Pro 7...
Read Full Article • 322 comments