Apple has revealed a collection of Siri improvements coming to iOS 12, centered around a new app called "Shortcuts." Shortcuts will let users connect certain third-party apps to Siri to greatly streamline voice controls. For example, the Tile app will let you add a shortcut to Siri so you can say "I lost my keys," activating Siri and showing Tile actions right in the Siri UI.

Other examples include creating a Shortcut to automatically open an app when you get to the gym every day, turning on Do Not Disturb at the movies, calling a family member on their birthday, and more. With the Shortcuts app, all of these customizable edits can be added and connected to an invokable Siri phrase. 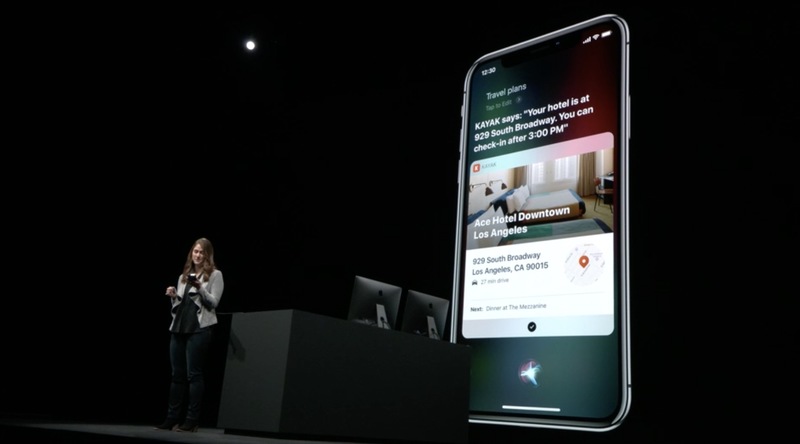 Apple gave another example where a person created a Shortcut from the Kayak app, connecting their hotel address with the Siri phrase "Travel Plans." So, when they quickly needed to get the address all they had to do was say "Travel Plans" to Siri and it came up immediately.

Far more intricate Shortcuts will be available, with one Siri phrase able to do things like adjust HomeKit thermostats, text a friend, read the news, and more, by simply saying something like "Hey Siri, I'm heading home."

midkay
This seems very powerful. The open-ended approach of letting apps expose their actions and letting the user choose which they’d like to use and how they’d like to phrase their Siri requests isn’t what I expected, but I think it might be a great solution. It seems like a big step forward from slowly adding 2-3 specific Siri domains per year as they’ve done in the past, and involving the user in setting up the Siri query seems necessary since you can’t just let apps start adding their own voice commands to Siri ad-hoc, it would be impossible to manage.

The ‘Shortcuts’ workflow app does seem very power-user centric, but the way they showed typical everyday apps presenting the user with an option of adding a Siri action seemed very reasonable and simple, and the fact that the user chooses the phrase makes it clear and helps them remember it, and keeps Siri uncluttered of hundreds of useless / potentially conflicting commands from crappy apps or for actions you just don’t care about. I’m pretty sure this is a solid approach. I can’t wait to try it.
Rating: 7 Votes

Freakstyles
We finally know why they acquired Workflow. Reminds me of Alexa skills but user created which is more personal and a lot better.
Rating: 6 Votes

Rather seems like making the user do themselves what the AI isn’t smart enough to do itself.

mazz0
Rather seems like making the user do themselves what the AI isn’t smart enough to do itself.
Rating: 6 Votes

Rather seems like making the user do themselves what the AI isn’t smart enough to do itself.

What? This is a good way to open Siri up without categorizing every action. The user sets the scenes and the apps can allow interactions to the users. It’s pretty brilliant.
Rating: 5 Votes

What world are the people thinking of these shortcuts living in? You're going surfing and need the phone to send you a reminder to use suncream? You drink a coffee every morning and need reminding of that fact?

Solution in need of a problem.


The reminder of the coffee wasn’t really the point, the point was it was able to bring up her regular order without her having to find the app, go into it and make the necessary selections each time. The scenarios they presented are likely to seem useless to a lot of people but I’m sure you can think of plenty of tedious tasks you perform on your phone that might be expedited by this process even if other people would think there was little value in it.
Rating: 4 Votes

JimmyHook
AI is still wonky. I can mke my own custom actions far better than any Google AI ever could
Rating: 3 Votes

AlbinoPigeon
This is huge! Let's hope they keep up support for it and improve as it matures. Otherwise it'll turn into another Automator gathering dust.
Rating: 2 Votes

palmerc2
Will I finally be able to use Siri with Spotify...?
Rating: 2 Votes
[ Read All Comments ]