There is an auto shutoff feature so you can enable the Eve Aqua via a voice command and then trust it to shut off after a period of time. Like other Eve products, the Eve Aqua connects to a HomeKit setup using Bluetooth.

Using HomeKit timers and automations, you can create autonomous schedules for your sprinkler system with the Eve app, and if you have an iPad, Apple TV, or HomePod as a home hub you can control your outdoor irrigation while away from home.

In addition to offering control over your water system, the Eve Aqua is able to track water consumption based on an irrigation system's flow rate, with the information visible in the Eve app.

The Eve Aqua is UV and water resistant and can be left connected up to your irrigation system all the time.

Elgato's new Eve Aqua is priced at $99.95 and can be pre-ordered from the Elgato website in the United States starting today.

Along with the Eve Aqua, Elgato is also debuting the Eve Flare, a HomeKit-enabled portable LED lamp that's available exclusively in Europe.

The Bluetooth-enabled Eve Flare is a round multi-colored indoor/outdoor lamp that's water resistant and able to offer six hours of illumination. It charges wirelessly and features a carry and hang handle. Like other HomeKit-enabled lamps, it can be controlled through Siri voice commands or through the Home app, and it can be set to any color of the rainbow.

Elgato is making the Eve Flare available for pre-order in Europe starting today for 99 euros.

Morris
Those living in the 21st century may find it comforting that the app can also display consumption in litres. :) 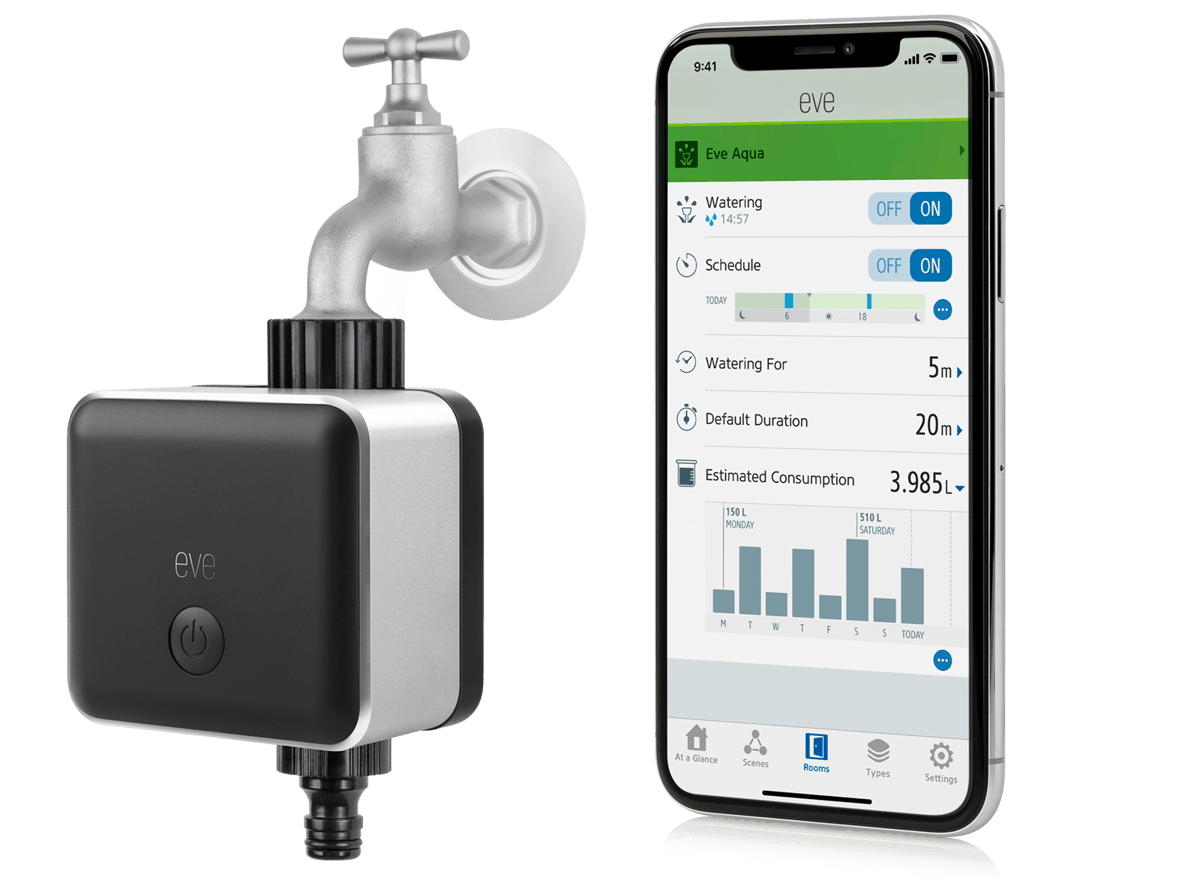 What sort of house needs the foundation watered? That's a new one for me.

Ones in Texas built on a clay/soil mix :) Ugly shifting and internal/external cracks will result from houses on dry soil common here in the summer. Technically we use drip irrigation to water the soil about 12" from the foundation, but everyone refers to it as "watering the foundation".
[doublepost=1527603083][/doublepost]OK I'll be the guinea pig.. just ordered one from Elgato.com
Score: 4 Votes (Like | Disagree)

I'm pretty sure I'd like this Eve Aqua. Ironic timing, as my current (very old school battery powered water timer) decided to die this weekend.

I'd use it to control the watering system that keeps my house foundation watered. Sprinkler system is controlled well via Rachio gen 2.

What sort of house needs the foundation watered? That's a new one for me.
Score: 3 Votes (Like | Disagree)

robertcoogan
Well, this is actually useful. Unlike the app that lets you control your shower. :P
Score: 2 Votes (Like | Disagree)

jimmirehman
Exclusive to Europe for the Lamp? WTF
Score: 2 Votes (Like | Disagree)

Yes, I had a hose timer for $30 that just broke. It was a purely manual process to deal with rain delays, checking to see if it was “on”(like I’d often not know for a week when the batteries had died), etc. I’ll pay the extra $60-$70 to get something a bit more sophisticated and simplifies my life just a bit. Could you go back to a manual sprinkler controller after using a Rachio for a while?

In the interests of science, by all means!

I've seen net capable hose timers for around $50. Maybe not HomeKit, but they can be controlled remotely.

My attraction to "smart" devices is how they can interact with other smart devices. A camera detects motion and turns on a light, your thermostat knows when you aren't home, that sort of thing. Hey maybe you could set your sprinklers to come on when somebody rings your front doorbell. That could be a hoot! :)
Score: 2 Votes (Like | Disagree)
Read All Comments