Tapbots is today launching Tweetbot 3, a new and updated version of its popular Tweetbot for Mac app.

Tweetbot 3 features a revamped interface that was rewritten from the ground up for the Mac. Compared to Tweetbot 2, the new app features a cleaner interface with more white space, persistent icons for replying, retweeting, liking, profile options, and more, and an overall cleaner look. 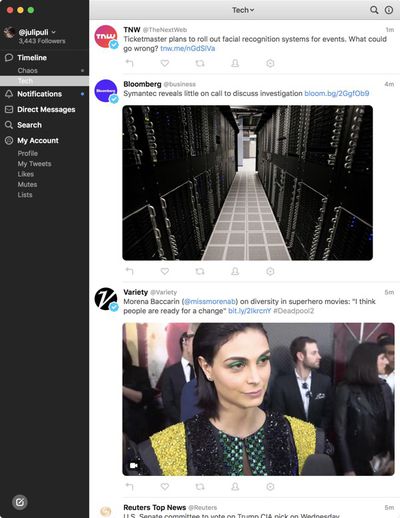 With the new timeline design, there are single-click tools for muting an account, blocking an account, or filing a report with Twitter so there is no need to go to a person's profile or open a profile in Safari to perform these tasks.

When viewing details for a particular tweet, there are now persistent icons that enable one-click replies, retweets, and likes for existing replies without needing to hover over the tweet.

At the left side of the app, there's a collapsible side bar that offers easier access to your follower count, lists, direct message conversations, and profile options. While the bar is expanded by default, pulling it to the left will collapse it back down so it's similar to the current Tweetbot 2 interface.

The new one-click button for composing a tweet is now located at the bottom right of the app rather than the top right, and it offers quick access to images, location, and emojis. Mentions and Activity notifications have been merged into one single "Notifications" tab, but there's still an option to view these separately if so desired.

It's much easier to work with multiple columns in the new version of the app. Rather than clicking and choosing "open in new column," you can simply drag from the right hand side of the app to create a column, with a drop down menu at the top available to choose what the column displays. Closing a column is as simple as dragging it back to the left.

There's also a new option for allowing media like GIFs and videos to autoplay right in the timeline, which is enabled by default (but you can disable it in the settings section of the app), and there are new one-click options at the top of the app for saving lists, searches, and DM conversations, plus an option to disable in-line media previews.

Both light and dark themes are available through the preferences portion of the app, and there are more options for customizing font size. Tweetbot 3 users will also notice that the app has an entirely redesigned icon, going from the standard square-shaped Tweetbot 2 bird to a rounded bird icon.

Customers who are planning on purchasing Tweetbot 3 may be concerned about some upcoming changes that Twitter is planning to make to its APIs. Twitter initially planned to introduce these changes on June 19, which would have involved deprecating certain APIs used for streaming purposes, but has indefinitely delayed them following developer outcry.

If and when Twitter does opt to disable these APIs, Tapbots says that Tweetbot 3 and other apps will continue to function, but a few features could be slower or removed. Twitter does, however, have replacement APIs, and should access to these be provided to developers, all functionality that is being deprecated will be able to be re-added to Tweetbot.

Tapbots says that the worse case scenario on Mac is that notifications for likes and retweets will not be displayed, and notifications for tweets, mentions, quotes, DMs, and Follows could be delayed by one to two minutes.

OldSchoolMacGuy
I'll pass. They did little to update version 2. Now they want another $10 for this version with little changed.
Score: 14 Votes (Like | Disagree)

If we don't support apps like this with a simple $10 every now and then, we'll be left with the hot garbage that is native Twitter on a web browser.
Score: 9 Votes (Like | Disagree)

Outsiderdude26
It's $10 for an upgrade app that I have used several hours a day for the past few years...

Yeah. No problem supporting indie devs. Plus I don't have to deal with the pos that is twitter's website. Adde bonus of a dark theme.
Score: 9 Votes (Like | Disagree)

hobsgrg
I've bought it as I want to support the developers. It is only two people who make it and they need to make a living, you can't expect free updates forever.

Although there doesn't seem to many new features they've done a lot of work behind the scenes and new version is much better designed for Mac rather than simply reproducing the iOS version.
Score: 8 Votes (Like | Disagree)

Diamond Dog
So, they basically re-skinned the app and want another $10 for it?

I'm going to buy it when I finish this post. But I'm disappointed they didn't add in some actual Twitter features, like group chat, polls, and threads. These are being widely used now, and you can't access them at all from Tweetbot.