Gaston D'Aquino says the Apple Watch saved his life. By sharing his story, he hopes it can help save the lives of others too. 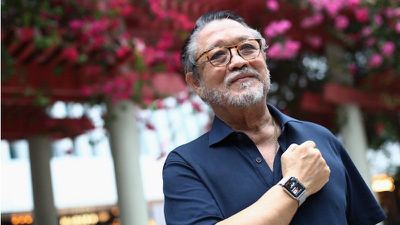 "I told the doctor I don't know why I'm here, but my watch tells me I have an elevated heart rate," said D'Aquino. "He says, 'Are you feeling anything?' I said no, I feel fine, I'm feeling all right, nothing's wrong."

After an electrocardiograph machine indicated something was wrong, doctors conducted tests and discovered that two out of his three main coronary arteries were completely blocked, with the third 90 percent blocked. Of course, that means he was at risk of suffering a potentially fatal heart attack.

D'Aquino said he had visited a cardiologist before, who had prescribed him daily medication for diabetes, high cholesterol, and high blood pressure, but there was never any indication that there were any deeper issues.

After the doctors shared the test results with him, D'Aquino quickly agreed to have an angioplasty, a procedure to restore blood flow to the heart by implanting tiny stents in clogged or blocked arteries. He was sent home the following day and said "it went well and I'm feeling much, much better."

"Having a new lease of life is a good thing," he said. "You wake up the next morning and you look around you, everything looks more beautiful. It's a great feeling; you're on a high for a few days. That feeling is something special."

As a self-professed Apple fan, D'Aquino sent an email to Apple CEO Tim Cook in early April. In recounting his story, he noted that "this was the first time that my watch alert had ever gone off, but I was not feeling anything, no dizziness or pain" and added that "in short, I was a walking time bomb."

"Please continue promoting the use of the Apple Watch for anyone with cardiac problems. I lost a cousin two weeks ago to a massive heart attack, and if he had an Apple Watch, he might have had the same opportunity I got – to live."

Cook said he was "so glad" to hear that D'Aquino is doing well now. "I appreciate you taking the time to share your story. It inspires us to keep pushing."

D'Aquino's situation might have been different had it not been for the Apple Watch's ability to detect an elevated heart rate, introduced in watchOS 4. When enabled, the feature notifies the wearer if their heart rate remains above a chosen beats per minute while they appear to have been inactive for a period of 10 minutes.

On all Apple Watch Series 1 or newer models, users can turn on heart rate notifications when they first open the Heart Rate app, or at any time later:

If you have any family, friends, or know of anyone else with an Apple Watch, remind them to enable this potentially life saving feature. For people like D'Aquino and Deanna Recktenwald, it has given them a new lease on life.

isaac_appleweed
Great Apple! Now lower the prices of your products. I get a heart attack every time I see the price of a Watch that has the potential to save my life.
Score: 60 Votes (Like | Disagree)

FelixDerKater
A benefit of volunteering to participate in the study. Glad to see it paying some dividends.
Score: 25 Votes (Like | Disagree)

Great Apple! Now lower the prices of your products. I get a heart attack every time I see the price of a Watch that has the potential to save my life.

Skip two lattes a month (good for your heart health too!), and you'll have an Apple Watch paid off in 18 months. You can get them on sale for $149.
Score: 24 Votes (Like | Disagree)

A benefit of volunteering to participate in the study. Glad to see it paying some dividends.

There are other benefits to participating in the studies that are occurring with the Apple Watch, but this man's life saving situation had nothing to do with the study and it doesn't appear he was in the study. His life was saved by the Apple Watch feature of notifying you when something is wrong. You don't have to be part of a study to use that feature.
Score: 22 Votes (Like | Disagree)

Bigsk8r
Like, love, hate, or loathe Apple, we should all agree that this is an example of what we want technology to be able to do for us.

I sincerely hope other manufacturers work on medical technologies as well. If there is eventually a committee that overseas standards for electronic health products for consumers like the CTIA does for cellular communication, it would be a win for the world.
Score: 16 Votes (Like | Disagree)

Where in the story did it say Mr. D'Aquino was participating in a study?

It didn't. That's a misconception that the poster and others have. The life saving feature is built in to the Watch OS and you don't have to be in a study.
Score: 15 Votes (Like | Disagree)
Read All Comments

Friday January 27, 2023 10:01 am PST by Juli Clover
Multiple rumors have suggested that the next-generation iPhone 15 models will adopt the Wi-Fi 6E standard that Apple has already introduced in the iPad Pro and MacBook Pro, and now a leaked document appears to confirm Apple's plans. Sourced from researcher and Apple leaker Unknownz21 (@URedditor), the document features diagrams of the iPhone 15's antenna architecture. D8x refers to the...
Read Full Article • 227 comments