Apple has applied to participate in a pilot program that would allow the company to operate drones in ways that are typically restricted by the Federal Aviation Administration in the United States, according to Reuters. 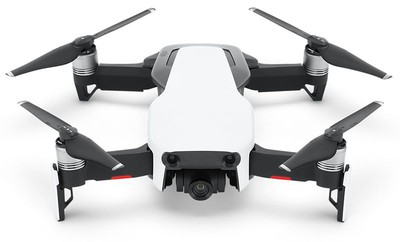 DJI Mavic Air
The report states that the U.S. Department of Transportation will announce 10 winning state or local government bodies for inclusion in the program today, and each has partnered with companies who will play a role in the tests. At least 200 companies are said to be vying to be part of the program.

The initiative, introduced by the U.S. government last year, will allow for a larger range of testing, including flying drones at night, over people, and beyond an operator's line of sight, within the United States.

The list of winners, which appears to have been determined, is said to include companies that plan to test drones for delivering packages, environmental monitoring, precision agriculture, pipeline oversight, and for various uses at airports, but it's unclear what Apple's intentions will be if selected.

Back in December 2016, Bloomberg's Mark Gurman reported that Apple planned to use drones to improve Apple Maps. The company itself does not sell any drones, aside from those made by other companies like DJI and Propel.

Update: The FAA has revealed the 10 government agencies who will conduct flight tests, including North Carolina's Department of Transportation. Apple will reportedly be a partner in North Carolina's program, and plans to use drones to capture aerial images to improve Apple Maps.

On the @Reuters wire now - Apple is a partner in North Carolina's drone testing pilot and plans to use drones to capture aerial images to improve Apple Maps. Apple will blur things like faces and license plate numbers to protect people's privacy, the comapny says. pic.twitter.com/nWmEpZTt2g — Stephen Nellis (@StephenNellis) May 9, 2018

NinjaHERO
Drones are such an interesting thing. It's fun to watch how they integrate into different parts of business and society. I'm seeing lots of real estate agents using them to take amazing photos of the houses they are selling. Also for roof inspections after storm damage. We just used one to take a cool arial shot of our building. I wonder how long before they are buzzing around everywhere and driving us nuts? lol
Score: 8 Votes (Like | Disagree)

Bigsk8r
What other countries - Japan in particular - are doing with drones in agriculture is really amazing. Just one example...

I was in a summit meeting not long before the current testing rules were relaxed to allow some free UAV test zones, the biggest of which is over Northern Michigan. In those info sessions, it was highlighted how some Japanese farms were using drones and infrared to find where beetles and other insects were attacking crops.

Once the area is detected, it was mapped, margin added, and another drone or small aircraft deployed to crop dust just that area. The implications for reduced chemicals in the air and groundwater as a result of only treating the 10 acres that need it, rather than all 500 are more than significant. They are game changing for both technology advancement and environmental control.

I would not bet against Apple looking at this from many angles. Yes, Maps is certainly on someones radar, but there are dozens - maybe hundreds - of possibilities.
Score: 2 Votes (Like | Disagree)

trusso
I'm sorry. I'm probably being a party-pooper, but whenever I read articles lauding drones or smart-glasses or internet-of-things, I can't help but think of the slippery slope we're traversing. o_O

“There was, of course, no way of knowing whether you were being watched at any given moment. How often, or on what system, the Thought Police plugged in on any individual wire was guesswork. It was even conceivable that they watched everybody all the time. But at any rate they could plug in your wire whenever they wanted to. You had to live – did live, from habit that became instinct – in the assumption that every sound you made was overheard, and, except in darkness, every movement scrutinized.

Winston kept his back turned to the telescreen. It was safer, though, as he well knew, even a back can be revealing.”