Apple today seeded the third beta of an upcoming iOS 11.4 update to developers, two weeks after seeding the second beta and over a month after releasing iOS 11.3, a major update that introduced several new features. 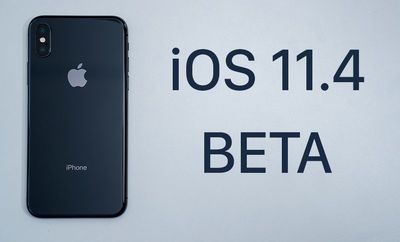 For standard users, the iOS 11.4 update adds features that were originally present in the iOS 11.3 beta but removed ahead of release. It includes support for Messages on iCloud, designed to store your iMessages in iCloud rather than on each individual device, allowing for improved syncing capabilities. Currently, incoming iMessages are sent to all devices where you're signed in to your Apple ID, but there is no true cross-device syncing.

The update also offers AirPlay 2 features, with the Apple TV once again available in the Home app. With AirPlay 2, the same audio content can be played in multiple rooms on devices that support AirPlay 2, such as HomePod. Speaking of HomePod, there were initially signs of support for stereo sound, a long-promised feature, but stereo sound never worked in the beta and the mention was removed in beta 2.

For the iPhone 8 and iPhone 8 Plus, there is a new (PRODUCT)RED wallpaper available, which is not available on iPhone X.

iOS 11.3, the previous update to iOS 11, introduced a new Battery Health feature for monitoring the status of your iPhone's battery, Business Chat for iMessage, which lets you communicate with companies directly in the Messages app, ARKit 1.5 with augmented reality improvements, new Animoji on iPhone X, Health Records from participating medical providers, and more.

Update: Apple has made a new public beta of iOS 11.4 available to its public beta testing group.

cmaier
Looking forward to them dropping airplay 2 again and moving it to iOS 12.
Score: 12 Votes (Like | Disagree)

Looking forward to them dropping airplay 2 again and moving it to iOS 12.

Ugh. WTheF? Why can't Apple with their thousands and thousands of employees get Airplay 2 working? Do they need to build another spaceship to double their workforce.

Apple TV, which is the only other device besides the Homepod to support Airplay 2. I don't want to buy a Homepod, I want to use the speakers I already have. Except the only output A/V port from an Apple TV is HDMI. That's a problem for people who are looking to use their existing speakers with Airplay 2 and do not want to purchase a Homepod.

I would love for Apple to make a cheap dongle, like the Google Chromecast Audio (https://store.google.com/us/product/chromecast_audio?hl=en-US), so that multiple speakers in different rooms can play the same audio.

But I'm guessing Apple doesn't have the talent to get Airplay 2 working or build a device like this. It's horrendous at this point.

So you are just asking how to connect HDMI to regular speakers? The same way it's always been done. Either output HDMI into a receiver, or into a TV with audio outs.
Score: 6 Votes (Like | Disagree)

Looking forward to them dropping airplay 2 again and moving it to iOS 12.

Same with iMessage in iCloud. /s
Score: 5 Votes (Like | Disagree)

That cheap dongle you are looking for exists: it's called Airport Express, you can buy the old gen on eBay for less than $20 (I got one for $10), plug an optical cable into it ($5) and to your speakers and boom you now have Airplay compatible speakers.

Do we know Airplay 2 is coming to the AirPort Express?
Score: 4 Votes (Like | Disagree)

yeah to be clear, this beta does NOT include the HomePod stereo or multiroom function again - still MIA. doubt its coming honestly in 11.4 at this point

Thank you for a clear message that distinguishes between HomePod Stereo and mutiroom function.

Multiroom function is all I’ve been waiting for. If it’s possible to control and play music on multiple speakers, Apple TV and multiple Homepods via iTunes on the Mac - and control on the Mac via in the ancient remote app on the iOS device - I can’t see why it’s so hard for them carry over to iOS.

I’m hoping against hope that we’ll see it in the next beta, along with firmware updates for HomePod, and for Apple Express Routers to support Airplay2.
Score: 4 Votes (Like | Disagree)
Read All Comments