Apple's widely rumored trio of new iPhone models expected to launch in September might not include a Lightning to 3.5mm Headphone Jack Adapter in the box, according to Barclays analyst Blayne Curtis and his associates. 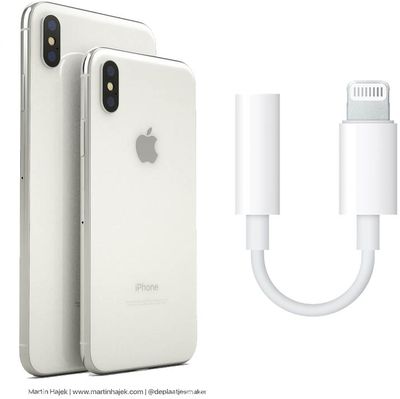 "We currently model no dongle this year," the analysts predicted, in a research note obtained by MacRumors today.

Cirrus Logic would be the primary loser within Apple's supply chain, as a supplier of audio-related components inside of the adapter. Barclays has lowered its quarterly and yearly revenue guidance for the company by up to five percent, for the time being, but that could change if they hear otherwise.

At this point, it appears that the Barclays analysts are merely guessing that the adapter will no longer be bundled, as in previous research notes, they have mentioned it may take until May or June to find out for certain.

Barclays does have some credibility in this area, as last year, the investment bank accurately predicted that Apple would continue to include the adapter in the box alongside the iPhone 8, iPhone 8 Plus, and iPhone X. The analysts routinely visit with Apple's supply chain partners in Asia to gather information like this.

"We believe it stays this year but goes away at some point, potentially in the 2018 model," the analysts said back in April 2017.

Apple eliminating the headphone jack starting with the iPhone 7 was a controversial decision, but the adapter has at least helped ease the transition. Its inclusion has always felt temporary, and as AirPods and other wireless headphone become more widespread, Apple may no longer feel the need to bundle the dongle.

Apple still sells the Lightning to 3.5mm Headphone Jack Adapter for $9 as a standalone accessory, which is cheap by its standards, so customers that prefer to use wired headphones won't be forced to pay too much extra whether the adapter is removed from the iPhone box this year or at a later time.

HobeSoundDarryl
Hooooray! About time. We consumers that care about best sounding audio really want to pay extra so we can hear it. Truly a dream come true. I wish they hadn't waited so long.

Keep the iPhone price the same or raise it (we prefer the latter of course). Then, sell us only your battery case starting with that 3rd generation. Don't worry: while some of us will whine about this move, the bulk will just fall right in line because whatever you decide is best for all of us IS actually best for all of us. Don't be fooled by naysayers who offer counterpoint. They know that whatever a corporation decides is actually best for all consumers: "$2XX Billion in the bank can't ever be wrong"

Ideally, roll out Lightning 2 right before you stop including a battery case in the box and be slow about approving third parties for Lightning 2 accessories, so that only YOUR battery case can power the iPhone that rolls out with Lightning 2. Charge as much as you want because you'll be the only supplier. Again, don't worry: while some will whine about this, the bulk will work overtime spinning it as best for everyone and shouting down anyone who "thinks different." Unlike this headphone adapter, you can make even more money from us because ALL of us will need to buy a battery case.

Then, repeat this tactic with the camera. Shift it out to an add-on module, include it for a generation or two, then roll out several ("collect them all") camera modules at premium prices and stop including any camera module in the box. Make sure the camera module connector is proprietary and do the slow licensing thing so that only Apple camera modules are available for purchase for months after launch. And again, do not cut the price of the phone itself. We would MUCH rather you INCREASE the price so we can keep slinging around "but who makes the most profitable phone" in all those market share threads.

In both scenarios, raise the price of the phones and just lengthen the payment plan terms so that you and some of "us" fans can spin seemingly cheap monthly payments "it's only $X.XX more per month." That the payment plan people are on the hook for 36 or 48 or 60+ months doesn't matter- just get the payment amount low enough so that any higher price can sound like it's not much higher spread over ever-lengthened payment time tables.

thenewyorkgod
lose the dongle? then include airpods.

Why not leave a charger out of the box while you're at it?
Score: 50 Votes (Like | Disagree)

ThisBougieLife
I wish iPhone would get on the USB-C train. Lightning is old hat.
Score: 35 Votes (Like | Disagree)

acorntoy
I’ve heard that Apple plans a radical new move, integrating the adapter into the phone itself and calling it an Apple jack. This will further simplify things and create a more “it just works approach”. Oh wait........ :apple::p
Score: 24 Votes (Like | Disagree)