For the Saudi prince and his entourage of officials, the visit was part of a whirlwind tour that included stops to visit Virgin founder Richard Branson, Google co-founder Sergey Brin and CEO Sundar Pichai, and Magic Leap founder Rony Abovitz. 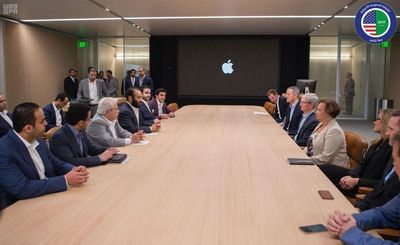 According to the press release, the aim of the discussion with Apple executives was to talk about technological solutions for "enriching the Arabic educational content in the classroom" as well as the creation of an educational curriculum for Saudi schools. The meeting also covered the potential creation of job opportunities for Saudi youths who received their training at Apple's headquarters.

The themes are broadly consistent with Apple's most recent focus on education at its Chicago event last month, where the company revealed its Everyone Can Create curriculum alongside its most affordable iPad with Apple Pencil support.

Following the meeting, members of the official delegation received technology-led presentations on Apple's work in the areas of health and marketing, before visiting the Steve Jobs Theater to learn more about Apple's "modern voice applications", which is likely a reference to the Siri digital assistant.

Apple is known to have been in discussions with Saudi Arabia to open its first retail store in the country as soon as 2019. State officials are said to be in licensing discussions with both Apple and Amazon in an effort to entice major technology companies into the country.

Saudi Arabia also recently lifted a ban on FaceTime and other services that provide access to calling someone over the internet, as part of government efforts attempting to attract more business to the country.

With the Crown Prince who's actively and very controversially (at home) pushing for women's equal rights and a modernization of Saudi culture across the board you mean? Because he is, you know. It's been in the news quite a bit. But hey, as long as you can ignore that in order to attack Tim...

And on that note let's not lie and pretend like things are some kind of equality utopia here either, with the rampant racism, obvious (and embarrassing) gender pay disparity and people STILL trying to strip away marital rights from gay couples like spousal health care in the name of the church.
Score: 29 Votes (Like | Disagree)

filmantopia
Wow, look at that body language on each side of the table.
Score: 17 Votes (Like | Disagree)

pruppert
This is the same guy who recently rounded up a bunch of his political rivals in a hotel and tortured them until they paid him to be able to leave. At least one was tortured to death.

With the Crown Prince who's actively and very controversially (at home) pushing for women's equal rights and a modernization of Saudi culture across the board you mean? Because he is, you know. It's been in the news quite a bit. But hey, as long as you can ignore that in order to attack Tim...

And on that note let's not lie and pretend like things are some kind of equality utopia here either, with the rampant racism, obvious (and embarrassing) gender pay disparity and people STILL trying to strip away marital rights from gay couples like spousal health care in the name of the church.

Really pushing the dial forward there, maybe Tim only saves his moral outrage for the US.

As for women, they still have to be assigned to a man, disgusting. Oh but they can drive now so it's all better.
Score: 12 Votes (Like | Disagree)

Noctilux.95
Never thought I'd see "Saudi Prince and Education" in the same sentence. Like seeing Hitler in an ad for human rights.
Score: 12 Votes (Like | Disagree)
Read All Comments

Wednesday May 25, 2022 8:56 am PDT by Hartley Charlton
Leaker Jon Prosser today shared ostensibly accurate renders of the iPhone 14 Pro, providing the most accurate look yet at what the device could look like when it launches later this year. In the latest video on YouTube channel Front Page Tech, Prosser revealed renders of the iPhone 14 Pro made by Apple concept graphic designer Ian Zelbo, highlighting a range of specific design changes...
Read Full Article • 105 comments