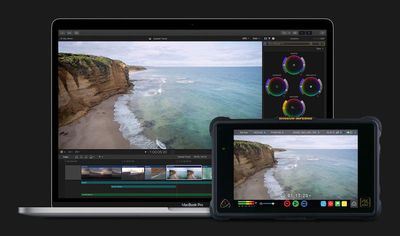 The headline feature is a new ProRes RAW format, which combines the visual and workflow benefits of RAW video with the performance of ProRes, a lossy video compression format developed by Apple for use in post-production.

With ProRes RAW, editors can import, edit and grade pristine footage with RAW data from the camera sensor, providing ultimate flexibility when adjusting highlights and shadows — ideal for HDR workflows. And with performance optimized for macOS, editors can play full-quality 4K ProRes RAW files on MacBook Pro and iMac systems in real time without rendering. ProRes RAW files are even smaller than ProRes 4444 files, allowing editors to make better use of storage while providing an excellent format for archiving.

The update also adds advanced closed captioning tools that allow video editors to view, edit, and deliver captions from right within the app.

Apple says Final Cut Pro users can import closed caption files directly into their project or create them from scratch. Captions appear in the viewer during playback and can be attached to video or audio clips in the timeline, so they automatically move with the clips to which they're connected.

Apple has updated its Final Cut Pro X, Motion, and Compressor pages on its website with more detailed information.

I doubt they'll ever add it in. Just transcode... and using Compressor you will (in theory; to be tested Monday) be able to transcode to ProRes RAW to get a workable RAW workflow from your CinemaDNG files... which was not really possible before. It'll be worlds faster and smaller than the CDNG files too, with all the flexibility.

This is a huge win/update!

Also anyone who owns a camera that outputs Raw to a Shogun Inferno, like we do (Sony FS5/Raw with the Shogun) will have a compressed Raw workflow now that is as capable as Red Raw without having to spend a dime extra. This is a huge update.
Score: 4 Votes (Like | Disagree)

I wanted that too for a looooong time. Although CaptureOne looks frightening first, its the best thing you can do to your photos, their engine is just pure awesome.
Score: 4 Votes (Like | Disagree)

jacjustjac
I really hope they fix the bugs I’m having with Optical Flow not rendering and problems importing clips. I’ve tried on three macs with 10.4 and it’s the same issue.
Score: 2 Votes (Like | Disagree)

MrXiro
Holy crap! I work at a film production company and captions are a bane on my life there. I really hope this makes it easier cause they are a pain in the ass to deal with.
[doublepost=1522983877][/doublepost]

Wait... closed captions? You mean it's only now coming to FCP? I could have sworn it was there before.

(Unless I'm confusing FCP with Compressor...)

You could edit and export but they were a pain to work with.
Score: 2 Votes (Like | Disagree)
Read All Comments