The eighteenth annual CanSecWest security conference is underway in downtown Vancouver, Canada, where researchers are competing in the 11th Pwn2Own computer hacking contest for over $2 million in prizes.

Day one results have already been published over at the Zero Day Initiative website, with a couple of successful Mac-related exploits already appearing in the list of achievements. 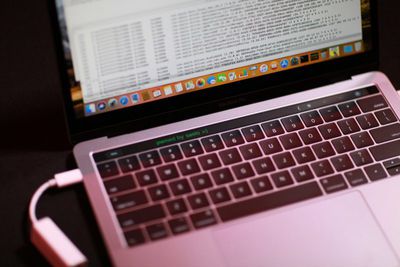 Image via Zero Day Initiative
Samuel Groß of phoenhex returned to Pwn2Own to successfully hack Apple's desktop Safari browser. Groß used a JIT optimization bug in Safari, a macOS logic bug, and a kernel overwrite to execute code to successfully exploit the browser, earning himself $65,000 and six points towards Master of Pwn. The exploit also caused a text-based message to appear on a MacBook Pro's Touch Bar.

The achievement harks back to Groß's similar success at last year's event, where he targeted Safari with an escalation to root on macOS that allowed him and Niklas Baumstark to scroll a message on a MacBook Pro Touch Bar, earning them $28,000.

Another Safari exploit at Pwn2Own 2018 was initiated by Richard Zhu, who managed to bypass iPhone 7 security protocols with the help of two Safari bugs at November's Pwn2Own mobile event. However, this time Zhu failed to get his exploit chain working within the allotted 30-minute time limit.

Richard Zhu at Pwn2Own 2018 (Image via ZDI)
Unfazed, Zhu returned to wow the crowd with a Microsoft Edge exploit that used two use-after-free (UAF) bugs in the browser and an integer overflow in the kernel to successfully run his code with elevated privileges. The dramatic effort against the ticking clock earned him $70,000 and seven points towards Master of Pwn.

Apple representatives have attended the Pwn2Own contest in the past, and affected parties are made aware of all security vulnerabilities discovered during the contest so that they can be patched in future software updates.

The participating teams earned a total of $162,000 in prizes on day one, and the event resulted in three Apple bugs, two Oracle bugs, and three Microsoft bugs. Pwn2Own day two begins today at 10:00 a.m. Pacific and will involve additional exploit attempts against macOS and Safari.

In a separate attempt, Markus Gaasedelen, Nick Burnett, Patrick Biernat of Ret2 Systems, Inc. tried to target Safari using an elevation of privileges kernel exploit, but the team was unable to get the exploit working in the allotted time period.

Kabeyun
Excellent. Bug bounties are great for everyone.
Score: 11 Votes (Like | Disagree)

now i see it
If guys using a laptop in their bedrooms can hack a Mac & iPhone during their spare time, one can only wonder what the NSA is capable of
Score: 3 Votes (Like | Disagree)

If guys using a laptop in their bedrooms can hack a Mac & iPhone during their spare time, one can only wonder what the NSA is capable of

Afaik, they’re hiring the same guys with laptops in their bedrooms.
Score: 2 Votes (Like | Disagree)

DeepIn2U
Hmph. And some macrumors members don’t understand the love for the TouchBar ;)

If guys using a laptop in their bedrooms can hack a Mac & iPhone during their spare time, one can only wonder what the NSA is capable of

One cannot understand why Apple doesn’t hire these people to work on Apple services and products. I really hope a Pawn team figures out and demonstrates a Siri hack and then Siri gets rapid advancement as a result.

Then again maybe their too busy having fun hacking Alexa:

Random creepy laughs,
Random answering questions or denying tasks in quite bedroom at 3AM,
Executing commands nobody in hearing range ever gave.

Yeah not in any need for a connected smart speaker. I already have insomnia I don’t need schizophrenia induced trauma to go along with it lol.
Score: 2 Votes (Like | Disagree)

Give me one good reason why do they need contests when each of them can report their hacking individually and earn more?

This entire "contest" is an illusion. The exploits that they are showing are not discovered on the spot, they are the product of months of research and development. However this dramatic fashion of unveiling them gives the researchers fame and publicity, and forces the vendor to acknowledge and fix the vulnerabilities rather than privately kicking the can down the road for potentially a year at a time.
Score: 2 Votes (Like | Disagree)
Read All Comments