Apple today released its 2018 Supplier Responsibility Report, which provides a look into Code of Conduct violations in the Apple supply chain and outlines progress made with new programs promoting health and education awareness.

Apple provides supplier responsibility progress reports on an annual basis in an effort to be transparent about the steps it takes to improve the lives of the employees who manufacture the wide range of Apple products available to consumers. 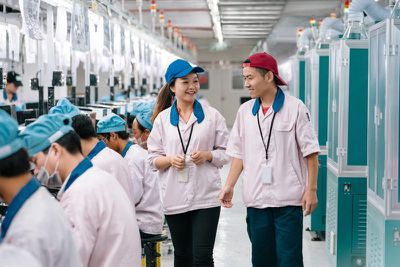 Apple conducted 756 audits across 30 countries in 2017 (up from 705 last year), and it says that its efforts to raise standards are having a "dramatic impact." The number of low-performing facilities (judged on a point system based on compliance with Apple's Code of Conduct) decreased to one percent during the year, and Apple saw a 35 percent increase in the number of high performers. Overall, Apple suppliers earned an average Labor and Human rights score of 86 out of 100.

Apple did, however, uncover 44 core violations at its supplier facilities, including three bonded-labor violations, 38 working hours falsifications violations, one access restriction violation, and two cases of underage labor. In one incident, Apple says 700 workers in the Philippines paid out a total of $1 million in recruitment fees for factory jobs, which Apple made the supplier pay back. These violations have increased from last year, and Apple says this is because it brought on several new suppliers during the year.

Last year, Apple launched a health awareness program for women at supplier facilities in India and China, which offers access to services and education on self-examination for early cancer detection, nutrition, personal care, and maternal health. Apple says that this program, along with others promoting education and worker rights, has been highly successful.

"We believe that everyone making Apple products deserves to be treated with dignity and respect and we're proud that almost 15 million people understand their workplace rights as a result of the work we've done over the years. We're going further with health education programs and new opportunities for advancement at our suppliers," said Jeff Williams, Apple's COO. "A new preventive health care curriculum is encouraging women to focus on their personal health, and hopefully share that knowledge with their families and communities. Our goal is to reach 1 million women by 2020. We know our work is never done and we're committed to raising the bar every year across our supply chain."

Apple also worked with Beijing Normal University and some of its larger suppliers to introduce a Factory Line Leader Program that offers practical vocational skills, guaranteed internships, and long-term full-time employment opportunities to workers in an effort to recruit more factory line leaders.

Apple says that over the course of the last 10 years, more than 2.5 million supplier employees have taken education classes under its Supplier Employee Education and Development program, and over 12,000 have enrolled for a degree.

As of 2017, all of Apple's final assembly sites around the world have been certified as zero waste to landfill, and suppliers working with Apple introduced energy efficiency improvements that reduced more than on 320,000 annualized metric tons of greenhouse gas emissions during the year.

Additional details about Apple's supply chain and environmental efforts can be read in the full 2018 Supplier Responsibility Report.

Apple_Robert
It would be good in many ways, if Apple would bring manufacturing back to the U.S.
Score: 3 Votes (Like | Disagree)

It would be good in many ways, if Apple would bring manufacturing back to the U.S.

It's just not feasible.
1. The human resources in the US have not been prepped up for factory work like this for a while. It will take a new generation of modifying the school system to prep up new workers that fit for the job, and this won't be overnight.
2. Even after that, it will take several more years for the skillsets of the workers to be up to par. The Chinese have been doing this for decades.

Of course, you can ask Foxconn to setup a factory in the US and bring some initial workforce. But then one would ask, would the education system want to change, and would the people even support this as it won't give jobs to Americans right off the bat. Short answer, nope.
Score: 3 Votes (Like | Disagree)

It would be good in many ways, if Apple would bring manufacturing back to the U.S.

There is no way Apple could pay what American workers would want, follow our labor laws (if a US company had to install nets around the building to catch the workers who snap and fling themselves out a window the government would shut them down in a heartbeat. This is to say nothing of dealing with the eventual cost of Unions while still trying to maintain their profit margins. The would have to raise the cost of their products to levels that would probably price them completely out of the market. People don't like it, but that's the reality.
Score: 2 Votes (Like | Disagree)

ericgtr12
Nice to see Apple taking steps with this, it would be nice to see Foxconn no longer have a need for suicide nets ('https://www.theguardian.com/technology/2017/jun/18/foxconn-life-death-forbidden-city-longhua-suicide-apple-iphone-brian-merchant-one-device-extract').
Score: 2 Votes (Like | Disagree)

San Francisco seems to have realised that 1600 people dying by jumping off the Golden Gate Bridge is enough. Many, many lifes too late.

Foxconn had the choice: Let people die, or put up suicide nets and have idiots all over the world chuckle about them. While saving lives. For saving lives at the expense of being ridiculed, they have my admiration.

I won't speculate as to why one is troubled enough to jump off the golden gate bridge, we all have our struggles. However, one does not have to speculate as to why they're jumping out of windows in a factory where they're worked to the point that they feel life is no longer worth living. They shouldn't have our admiration, they should have our protection and we should stand up against such deplorable conditions so it doesn't happen in the first place.
Score: 1 Votes (Like | Disagree)

Naraxus
The pressure these employees are under must be insane...
Score: 1 Votes (Like | Disagree)
Read All Comments