Apple has confirmed that a fix for a recently discovered bug that causes apps like Messages to crash on iPhone, iPad, and Mac has been included in iOS 11.3, macOS 10.13.4, watchOS 4.3, and tvOS 11.3, updates that are currently being beta tested ahead of a release this spring.

Furthermore, Apple told iMore's Rene Ritchie that the bug will also be addressed in an upcoming iOS update that will be released in the near future, ahead of iOS 11.3, so customers won't need to wait several weeks for a fix. Minor updates for other operating systems will likely come at the same time. 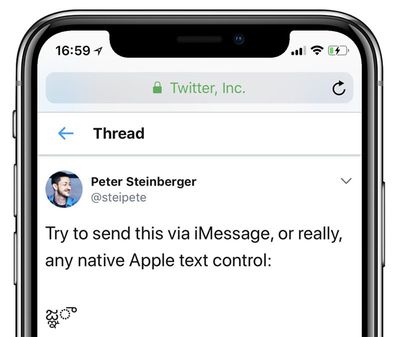 The bug, induced by sending a specific character in the Indian language Telugu, causes certain apps on iPhones, iPads, and Macs to freeze up and become unresponsive. Messages, Safari, WhatsApp, Facebook Messenger, and other apps that accept text input are all affected.

When the character is sent in an iMessage, for example, it can freeze up the entire Messages app on all of a person's Mac and iOS devices. The Messages app will then refuse to function properly until the offending character is removed by deleting the conversation with the person who sent it.

In some situations, if the character is viewed through an iOS notification, it can cause the entire device to crash, resulting in a re-spring or worse.

Apple users who have received a message with the character will, as mentioned above, need to delete the Messages conversation with the person who sent the character. Alternatively, installing the iOS 11.3 or macOS 10.13.4 betas will fix the problem.

mi7chy
This seems like a recurring semi-weekly occurrence. Maybe it's time to dump Messages and rewrite it from scratch with safe coding practices.
Score: 14 Votes (Like | Disagree)

And testing for 3 characters wouldn't have found that specific problem. The crashing character consists of 5 codepoints.

Unicode isn't like in the old times (like ASCII for example), where we had a direct 1:1 mapping between a codepoint and a character to render. Testing all Unicode combinations just won't work.
Score: 6 Votes (Like | Disagree)

daveak
So this isn't the first time a unicode problem has caused crashes. What is going on at Apple? After the first time you write a test which walks through every single character and tries to display it. Test fails when it crashes. Run test. Fix all crashes, problems solved. Why haven't they done this? Creating the test is 5 minutes work (admittedly the fixes won't be)
Score: 6 Votes (Like | Disagree)

crushna
This character/alphabet/word from my mother tongue is very very rarely used in a general conversation. Its is both hard to pronounce and also write . I am very surprised to actually somebody using this particular alphabet and found it to break the code. It must be someone who know the code
Score: 5 Votes (Like | Disagree)

justiny
What nose-picker adult living in their mom’s basement discover this bug?
Score: 5 Votes (Like | Disagree)

What nose-picker adult living in their mom’s basement discover this bug?

Actually it was discovered by an Italian developer. There have to be at least a couple of million Indians using iOS by now. Why didn’t they scream bloody murder immediately?
[doublepost=1518728203][/doublepost]

This seems like a recurring semi-weekly occurrence. Maybe it's time to dump Messages and rewrite it from scratch with safe coding practices.

Maybe time for you to switch platforms and be happy. But then there’s the serious Skype bug that Microsoft says is too much trouble to fix right now, and all the Android flaws that will never be patched because the carriers don’t care.
Score: 5 Votes (Like | Disagree)
Read All Comments

Saturday February 4, 2023 1:30 am PST by Hartley Charlton
Google's Chromium developers are working on an experimental web browser for iOS that would break Apple's browser engine restrictions, The Register reports. The experimental browser, which is being actively pursued by developers, uses Google's Blink engine. Yet if Google attempted to release it on the App Store, it would not pass Apple's App Review process. Apple's App Store rules dictate...
Read Full Article • 181 comments