Apple News will be a go-to source for coverage of the 2018 Olympic Winter Games in Pyeongchang, South Korea, which officially begin with Friday's opening ceremony, although some competition is already underway. 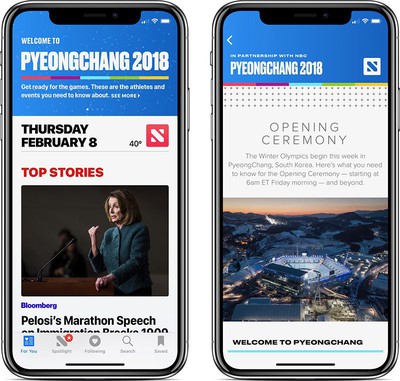 A new section devoted to the Winter Olympics is now available within the "For You" tab of Apple News in the United States, and it will feature articles, videos, and other coverage of the games over the next two weeks.

Apple has partnered with NBC for the new section, but coverage will be provided from a variety of sources, according to Ingrid Lunden at TechCrunch. Live streams and full replays of specific events will link directly to the NBC Sports app, while clips from events will be viewable within Apple News itself.

The portal will also feature a planner for viewers to figure out when specific events are scheduled, and it will allow users to add events they want to watch to their calendars. There will also be a medal tracker and daily roundups given a 14-hour-plus time difference between South Korea and the United States.

QCassidy352
saw this in Apple news this morning. How do I turn it off?
Score: 4 Votes (Like | Disagree)

Boatboy24
How about some special coverage on AppleTV?
Score: 4 Votes (Like | Disagree)

zubikov
If previous NBC Olympics are any indication, both TV and streaming coverage will be 1/3 commercials, 1/3 talking heads narrating emotional pieces on featured athletes, and 1/3 actual footage. Have fun watching 20 minutes of mindnumbing fluff to get to 10 mins of the good stuff.

The only palatable way to watch events these days is to DVR.
Score: 3 Votes (Like | Disagree)

I like the app. I do not like a particular story forced on me. I can turn every other topic on or off but not the Olympics? That’s ridiculous.

What if you go to Settings under News and click the option "Restrict Stories in For You"?
Score: 2 Votes (Like | Disagree)

Yup. Still not avail in Canada.

Nope, it's because CBC has the broadcast rights in Canada (shared with TSN and SportsNet), so the NBC-provded content would be in violation of that. We're not a large enough market for Apple to make local changes.
Score: 2 Votes (Like | Disagree)
Read All Comments