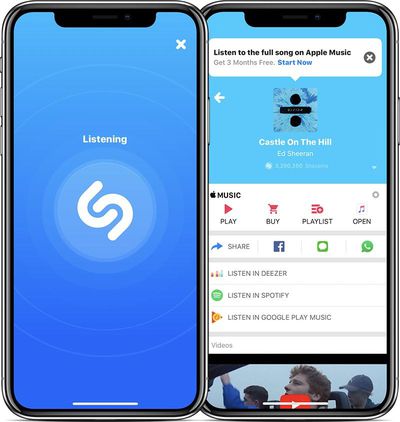 The regulatory body will consider whether the transaction may lead to a significant adverse effect on competition in Europe:

On the basis of the elements submitted by Austria and the countries joining the referral request, and without prejudice to the outcome of its full investigation, the Commission considers that the transaction may have a significant adverse effect on competition in the European Economic Area. The Commission has also concluded that it is the best placed authority to deal with the potential cross-border effects of the transaction.

The European Commission didn't specify how the deal could hurt competition, but Shazam does have partnerships with European companies like Spotify that could be affected by the acquisition. However, it's standard for major acquisitions to be subject to review, so the deal may be approved of without scrutiny.

Apple confirmed it plans to acquire Shazam in December in a statement provided to MacRumors and other publications:

We are thrilled that Shazam and its talented team will be joining Apple. Since the launch of the App Store, Shazam has consistently ranked as one of the most popular apps for iOS. Today, it's used by hundreds of millions of people around the world, across multiple platforms. Apple Music and Shazam are a natural fit, sharing a passion for music discovery and delivering great music experiences to our users. We have exciting plans in store, and we look forward to combining with Shazam upon approval of today's agreement.

Shazam is a popular service that can identify the name and lyrics of songs, music videos, TV shows, and more. It has apps across iPhone, iPad, Apple Watch, Mac, and iMessage, while the service has been built into Siri since iOS 8. The app is also integrated with streaming music services like Apple Music.

In September 2016, Shazam announced that its mobile apps had been downloaded more than one billion times since launching. Shazam's original iPhone app launched in 2008, and uses machine learning algorithms to identify audio clips. The app has since expanded into areas like augmented reality.

Base on Apple and its previous purchase, we will know that Apple will stop make Android version of Shazam. Which will negatively effect competition.

I will say though, if this transaction go through, one of the condition is that Apple will continue support Android version of Shazam.

As far as I'm aware, Apple has continued to make Apple Music (formerly Beats One) for Android available.
Score: 9 Votes (Like | Disagree)

ActionableMango
SoundHound works noticeably better for me. It is amazing to me that SoundHound can correctly identify a song even when I hum it in a very poor manner including portions with outright errors and omissions because I cannot remember it correctly.
Score: 4 Votes (Like | Disagree)

Yes, but you can always use SoundHound.
Score: 3 Votes (Like | Disagree)

df22799
@truthertech your implied "accusation" that EU is leaning towards socialism, like socialism would be a bad scary thing is uncalled for. Just from that, I take it there`s a good chance you`re from US.

As for competition for hurting other companies I`d suggest you look finite game theory. Anti-trust laws and inquiries are not about reducing competition, they are about making sure there is no abuse from a dominant position.
Score: 3 Votes (Like | Disagree)

Think about Apple's purchase of Buddybuild. They shutdown Android support after the acquisition. Same thing could happen to Shazam as well

That's only because it benefits themselves though. The Android app is just an afterthought at this point.

If the whole reason for them buying Shazam was to funnel more people into Apple Music AND Apple Music is available on Android then... well I'll let you do the math.
Score: 3 Votes (Like | Disagree)

mtneer
Just hope that Shazam doesn't end up like what happened to the original Siri's trajectory..
Score: 3 Votes (Like | Disagree)
Read All Comments