Over the course of the last few months, several companies have decided to end development on apps for the Apple Watch, focusing instead on Apple's iOS platform. The latest company to nix its Apple Watch app is Slack. If you're unfamiliar with Slack, it's a team communication and collaboration platform for businesses.

In an update to its iOS app today, Slack eliminated its standalone Apple Watch app. Slack customers will, however, still be able to respond to incoming messages on their Apple Watch thanks to rich notifications. 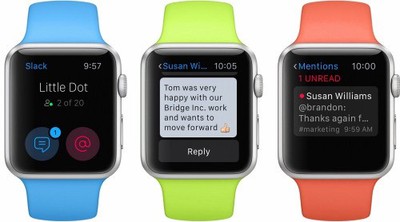 Apple Watch users, there's now one iOS app for all of your needs. We've removed the standalone Watch App, but rest assured, receiving and replying to messages from your wrist works the same as before. It's like two for the price of one, but with apps.

Slack's Apple Watch app, like many of the Apple Watch apps that have been abandoned, was never particularly useful, so it's no surprise Slack has decided not to dedicate additional resources to it. The Slack Apple Watch app let users view unread mentions and view and respond to direct messages, but these features were not easy to use on a wrist-worn device. It also let users receive and interact with notifications, features that are still available through an iPhone.

When the Apple Watch was released, most companies developed an Apple Watch app for the device even if the app didn't do anything useful, because it wasn't yet clear how and when people would use apps on the wrist. As the Apple Watch has matured, though, it's become clear that most dedicated apps offering anything beyond a quick interaction aren't used often enough to be a worthwhile use of company resources.

For example, Twitter in September ended support for the Apple Watch, eliminating the standalone Twitter app on the device. At the time, Twitter said that it felt notifications were the most helpful part of the Apple Watch Twitter experience, which is also what Slack is now relying on.

Other companies that have stopped offering Apple Watch apps include Target, eBay, Whole Foods, Amazon, and Google (for Google Maps). eBay and Google have both said Apple Watch support might return in the future, but have not yet released new apps.

Gorms
Twitter was wrong to remove their app from the Watch. It was literally a life saver when you were sat on the toilet and you’d forgotten your phone
Score: 11 Votes (Like | Disagree)

sputnikv
watch apps never made sense to me. what you want are rich third party complications and rich notifications
Score: 6 Votes (Like | Disagree)

- rob -
I have felt for some time that the watch is largely an open hw and sw prototyping tool for the Apple glasses.

Apps really don’t make a lot of sense but the annual effort to miniaturize, increase capability (gps, LTE hw and service integration) all seems like public testing toward some other tiny device.
Score: 4 Votes (Like | Disagree)

Elijahg
I'm not at all surprised, I don't use any third party apps on my Series 1 Watch as they're so unreliable. More often than not they sit with an endlessly rotating loading indicator, and I give up after about 20 seconds before the app's loaded. The Watch is supposed to be about quick interactions, that's impossible with third party apps. I don't blame third party developers, since pretty much all apps are the same; slow and unreliable.
Score: 4 Votes (Like | Disagree)

Twitter was wrong to remove their app from the Watch. It was literally a life saver when you were sat on the toilet and you’d forgotten your phone

I still don’t understand how people use phones in bathroom or rather on the toilet
Score: 3 Votes (Like | Disagree)

I'm not at all surprised, I don't use any third party apps on my Series 1 Watch as they're so unreliable. More often than not they sit with an endlessly rotating loading indicator, and I give up after about 20 seconds before the app's loaded. The Watch is supposed to be about quick interactions, that's impossible with third party apps. I don't blame third party developers, since pretty much all apps are the same; slow and unreliable.

I can confirm almost exactly the same experience with my Series 2. :( 3rd party apps are so slow and unreliable, I stopped torturing myself (RunKeeper was a total disaster, crash every other time. Philips Hue takes forever, Shazam also takes so long to start the song is often gone already). Now my Apple Watch 2 is just for notifications and general built-in activity tracking.

I would honestly like to know - is Series 3 any better?
Score: 3 Votes (Like | Disagree)
Read All Comments