Earlier this afternoon, a bug with the Apple News app caused notifications for a single CNN news story to be sent out to iPhone and iPad users over and over again.

The issue, which lasted for approximately 15 minutes, appears to have impacted all Apple News subscribers who had alerts turned on for CNN based on a slew of complaints that popped up on reddit, Twitter, and the MacRumors forums. 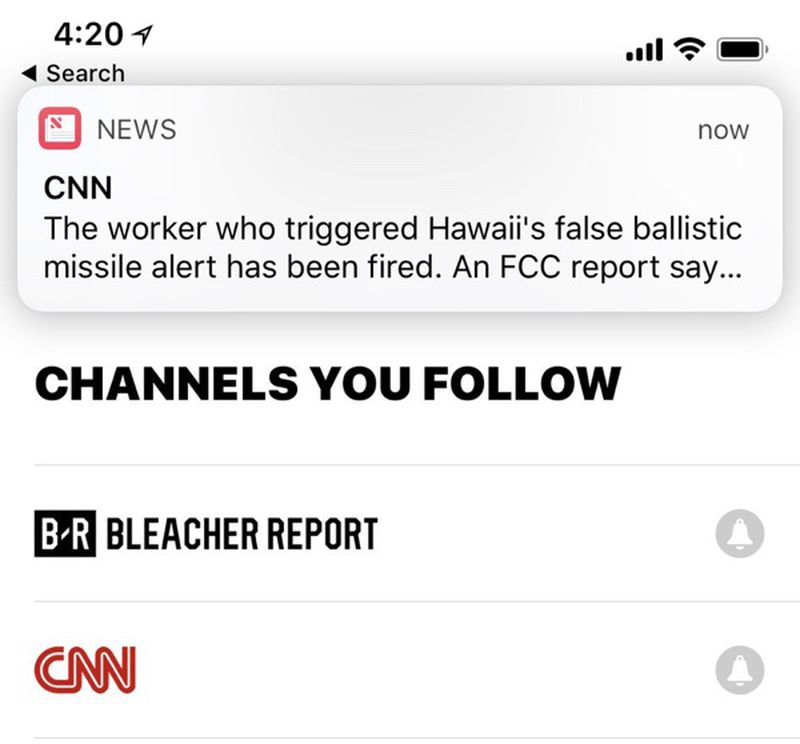 It wasn't clear if the problem was with CNN or the Apple News app, but on Twitter, CNN claims it was the latter. According to the news organization, CNN only sent a single notification, and the company is working with Apple to identify the problem.

We are aware that some Apple News users recently received multiples of the same alert. Our server log shows CNN sent only one. We are working with Apple to identify their issue, as users on CNN-owned platforms did not experience a problem. Apologies to those who did.


Customers who were affected by the repeated notifications received somewhere around a hundred notifications, and the notifications in question were interrupting normal device operation. It appears that the issue centered around a single CNN news story, but we've also seen reports that some notifications from Fox News also repeated.

@MacRumors is anyone getting nonstop @CNN alerts about the Hawaii false alert? I have the alert turned off and still getting them. pic.twitter.com/zKLeDMhng7


The only fix for the issue at the time was to turn off Apple News notifications, but the problem was resolved by Apple quickly and customers who did turn off their notifications due to the CNN alert bug can now safely re-enable them.

now i see it
I wasn't aware that anyone used the Apple News app any more.
Rating: 15 Votes

OldSchoolMacGuy
And yet, countless other users of Apple News haven't had any issues. So somehow this is a bug that only impacts CNN but is Apple's fault?

Not seeing multiple notifications on any of my sites that also push to Apple News.
Rating: 13 Votes

pika2000
I guess this is a way for CNN to get some people to notice them.
Rating: 6 Votes

ebernet
I thought someone was trolling given the content of the CNN notification I kept on getting about false notifications lol
Rating: 6 Votes

Jonathan7877
I have it happening with Fox News alert as well repeatitively.
Rating: 5 Votes

I wasn't aware that anyone used the Apple News app any more.


The Apple news app is great. You should give it a shot.
Rating: 4 Votes

The Apple news app is great. You should give it a shot.


I look occasionally, then I remember why I don't watch the news.
Rating: 3 Votes
[ Read All Comments ]