Office for Mac today received a major update, with Microsoft updating the software to version 16 and introducing new features for Word, Excel, PowerPoint, and Outlook.

In Word, Excel, and PowerPoint, Microsoft is introducing real-time collaborative editing, allowing multiple people to work on the same document at the same time. In Word and PowerPoint, flag icons will let you know what others are working on and what's been changed.

Changes to documents, worksheets, and presentations stored in the cloud will be saved automatically, and updates will be synced in seconds. A version history will let you roll back to earlier versions of a document if necessary. 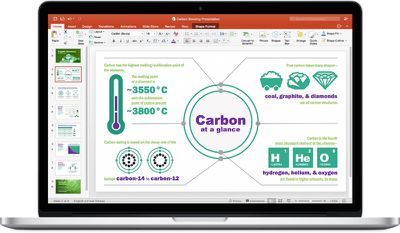 PowerPoint includes a QuickStarter function that lets you create an outline complete with suggested talking points and designs, while a new Trim Media tool will let you quickly edit audio and video clips. The mouse can also be used as a laser pointer in Slide Show for highlighting slide content.

Outlook, Microsoft's email app, is gaining a new feature that will let you archive or delete emails with a swipe across the touchpad, and support for Google Calendar and Contacts has been added.

Along with these feature changes, version 16 of Office 2016 for Mac includes an overhaul of the underlying code for Office, PowerPoint, and Excel, introducing more common code between platforms to ensure better feature parity.

Full details on what's new in Office for Mac can be found in the release notes shared on Microsoft's Office 2016 for Mac support site.

EatinPonies
...but do these changes include multi-CPU/multi-threaded processing? Because taking 45 minutes to calculate some of my Excel documents is absurd, especially when I have other CPUs sitting there idle.

EDIT: YAY!! It does!!! "Multi-threaded calculation Formulas are updated faster when values are changed, because Excel uses multiple processing threads."

EDIT2: Well... I just did a test. It's now using 2 threads, which is obviously better than 1, but still not using the whole of my MacBook Pro's potential.

Most Mac software from Apple is doing that unfortunately.

I guess you missed the huge update Final Cut Pro and the other pro video apps just got, plus the other iWork updates from 2017. :rolleyes:
Score: 3 Votes (Like | Disagree)

the_color_orange
Office 2016 is powerful. I use it for almost everything. I feel bad that iWork hasn’t received any love. Looks like Apple gave up with their productivity applications.
Score: 3 Votes (Like | Disagree)

Most Mac software from Apple is doing that unfortunately.
Score: 3 Votes (Like | Disagree)

mrzz
In Excel it enables cell selection "glide" animation in default which slows down your work. It still can be disabled (Excel > Preferences > Edit and uncheck the "Provide feedback with animation" checkbox).
Score: 2 Votes (Like | Disagree)
Read All Comments