Apple recently introduced an all new design for App Store apps on the web, with a new, cleaner interface that puts screenshots and critical information front and center. 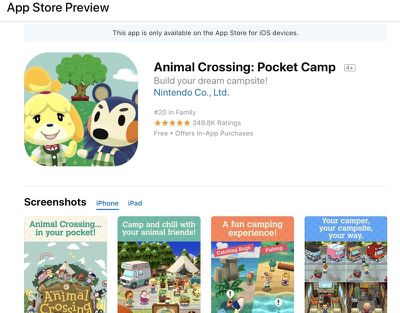 App listings include the app's name, icon, and screenshots, along with information like star rating, ranking, purchase price and whether or not there are in-app purchases.

While an app's description used to be the first thing that came up when accessing an app on the web, it's now listed underneath screenshots, which, as 9to5Mac points out, are iPhone X screenshots. App Store webpages also include a listing of what's new, select reviews, app size, and a list of related apps.

The change to the way apps are displayed on the web comes following the launch of iTunes 12.7, which entirely eliminated the built-in App Store for iOS apps. With no App Store in iTunes, iOS apps can only be downloaded directly on an iPhone or iPad, rather than downloaded on a Mac and then transferred to an iOS device.

When making the change, Apple didn't really alter the way apps were displayed on the web, which had the potential to be confusing. The new look is much more streamlined and makes it clearer how apps can be downloaded on an iOS device.

Because of the elimination of the App Store in iTunes 12.7, some users have decided to continue using iTunes 12.6.3, which does include App Store functionality. Apple made iTunes 12.6.3 available for its educational and business customers who need iTunes to install apps, but it is also available to the general public.

Xenomorph
So, for those using an older device, let's recap:

* You could not purchase/download apps from their old website - Apple says that you need to use iOS.

* You cannot purchase/download apps from old versions of iOS - Apple says that you need to use iTunes.

* You cannot purchase/download apps from a current iTunes build - Apple removed that after with the 12.7 update.

* With their NEW website to show off apps, you still cannot purchase/download apps.

Apple recently introduced an all new design for App Store apps on the web, with a new, cleaner interface that puts screenshots and critical information front and center.

Nice cleanup but ..
Too bad that you cannot check the reviews by date or by ratings anymore. Same in iOS
Ratings = useless :(
To check those you need to go in the Mac App store or to have iTunes 12.6.3
Score: 11 Votes (Like | Disagree)

B4U
Apple just loves to make it harder to use every day now.
12.6.3 cannot reset plays on multiple tracks at the same time, while 12.7 does not have the App Store.
Damn, I miss the old times when things just WORKS!
Score: 11 Votes (Like | Disagree)

Apple just loves to make it harder to use every day now.
12.6.3 cannot reset plays on multiple tracks at the same time, while 12.7 does not have the App Store.
Damn, I miss the old times when things just WORKS!

The more of a power user you are, the more Apple's new screw everything ethos will affect you. It really sucks. Apple Music ruined iTunes, the direction ahead doesn't look more promising. I miss the old days. I loved organizing my music, creating smart playlists based on ratings. Now it seems the more you upgrade, the more you lose beloved features and often feels like a downgrade (see iOS updates and the battery issues, Macbook Pros, High Sierra, and iPhones).
Score: 9 Votes (Like | Disagree)

ThunderSkunk
I put a big mac pro dual quad xeon cheesegrater to work as our in-home server & media hub on our intranet. It's effortlessly running Snow Leopard and working perfectly. Of course, locating old compatible versions of software requires a bit of adventuring into illicit waters, since the App Store can't recognize what OS you're on and show you compatible versions of apples own apps, which, luckily there are alternatives for OSX, but for iOS devices, throw em in the garbage.

The version of itunes on it is an absolute pleasure to look at and use compared to the hamfisted mishmash of inconsistent design ideas the current version is.

I don't know who threw out everything Apple knew about making clean efficient UI's, but they need a boot in the heinie.
Score: 7 Votes (Like | Disagree)

bwillwall
Should have happened 6 years ago.
Score: 6 Votes (Like | Disagree)
Read All Comments