Amazon began taking pre-orders from U.K. customers for its Alexa-powered Echo Spot speaker on Tuesday. Announced along with all-new Echo models in September 2017, the compact display-and-speaker unit has only been available in the U.S. before now.

The Spot is capable of standard Amazon Echo functions like controlling smart home devices and streaming music, but can also show users additional information like song lyrics, weather forecasts, and the time on its 2.5-inch display. 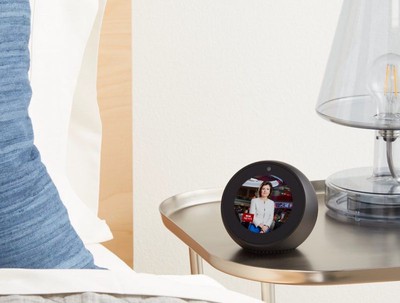 The Echo Spot costs £120, although Amazon is currently offering a discount of £20 per unit when two are bought together (£200). Pre-orders are expected to ship on January 24, which means the entire Echo family will be available to U.K. customers from then on.

The Echo dot was the top-selling Amazon device over the 2017 holiday season, as well as "the best-selling product from any manufacturer in any category across all of Amazon," according to the e-commerce company.

HomePod will be controlled mainly through the user's voice using Siri, and include access to Apple Music and other expected smart speaker functionalities, like asking about the weather, traffic, setting reminders, timers, and more.

Note: MacRumors may benefit from affiliate links clicked in this article

BMcCoy
Whether you want an Alexa device or not, you can't help but be impressed at Amazon's momentum with the range and roll-out of these assorted smart speakers. They're obviously popular, and selling.

I don't need one, or want one. But I think Amazon at leading the way here, and are rapidly creating an ecosystem that the users will want to stay in. They've learned how to do that from Apple.. ;)
Score: 6 Votes (Like | Disagree)

jimthing
Not buying any of these speaker assistant things.

I carry my phone wherever I am, so just use that piece of hardware if I feel the need to talk to a digital assistant.

More boxes all over the place is a needless waste.
Score: 3 Votes (Like | Disagree)

69650
If only Apple could release products this regularly. I’ve got the Echo Show and it’s really good.
Score: 2 Votes (Like | Disagree)

pete2106
I bought a Dot last year to mess about with and see what all the fuss is about and I found myself moving it from room to room because it was so useful in each. Now I have a Dot in each room except my computer room which has a full echo for listening to music on.

I was so surprised at how quickly I took to using it for more and more. I was always one of those "I have my phone and Apple Watch on me all the time, I'll just use them" people, but I've found the Echo speakers way better.

The only thing I hope Amazon do is improve the speakers, I bought one of the new Echos for the computer room and while the speaker is fine for a small room, it's not good enough for a larger room.

I'll totally be getting an Echo Spot for the bedside, but I'll be waiting until the next big sale when the price is dropped a bit.
Score: 2 Votes (Like | Disagree)

RickInHouston
We have one bedside. I'm an amazing lover and personally don't mind the camera. I do like that you can have the alarm start quietly and get louder. It's nice waking up gently.
Score: 2 Votes (Like | Disagree)

Is it possible to choose news source as an alarm clock function.
E.g. wake up too bbc or guardian news.

You can, It's not done using the Alarm clock, you set up a custom command for the echo to play a news briefing at a specific time so it acts the same as an alarm clock.
Score: 2 Votes (Like | Disagree)
Read All Comments