At CES on Tuesday, third-party accessory maker Matias announced an RGB-backlit wired aluminum keyboard for Mac. Inspired by Apple's own, now defunct wired keyboard, Matias' silver and space grey versions look almost identical, except for the addition of a "color dial" on the back and a dedicated key on the layout that allow users to incrementally shift the backlighting through the color spectrum. 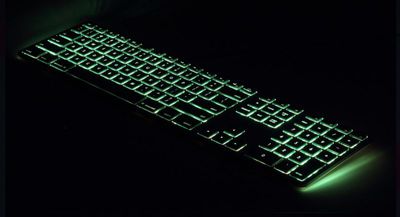 Citing a Harvard sleep study, Matias notes that too much blue-light exposure at night is known to negatively impact melatonin levels, which can shift the body's natural time clock — leading to poor sleep and various other health issues. However, the existence of the rotary color dial on its latest keyboard means users can dial back the blue component of white light when they're working late into the evening.

The RGB keyboard features Apple-style function keys to let users control screen brightness, volume, iTunes, and so on, and also includes a built-in USB 2.0 port underneath on the right hand side, for connecting a wired mouse or wireless dongle.

The keyboards cost $99 each and will be available in a wide range of international layouts (US, EU, and Asian). They can be pre-ordered now from the Matias website, with free shipping to the U.S. and Canada, for delivery in late February.

I’m glad to see this. I just wish Apple would come out with a backlit keyboard. It’s odd to me that they haven’t.

It was clearly more important to reduce the key travel and decrease the typing angle - as demanded by absolutely nobody at all.

Not even clear why wireless is a must-have on a desktop keyboard, either... solve the problem with backlights sucking power, and it is jolly useful to have a couple of extra USB-A ports on the desk, esp. with an iMac where all the ports are tucked around the back.

Matias notes that too much blue-light exposure at night is known to negatively impact melatonin levels, which can shift the body's natural time clock

...quite possibly a "thing" in the case of that ultra-bright 27" rectangle that you're staring intently at, but methinks that if your keyboard backlight is disturbing your sleep then you're holding it wrong...
Score: 5 Votes (Like | Disagree)

Because they want a uniform typing experience across all their products.

I could almost understand that, but it's not the same part - its a sort of half-way house between the old-style (excellent) key switch and the (horrible) new MBP keyswitch. Its not bad - and I stuck with it for several weeks before deciding it was just less comfortable and somehow more error-prone that the old keyboard, and switching back. Some people seem to like it (but then I know people who liked the hockey puck mouse and Windows Vista :-) ) but several others here have found the same as me: it feels OK at first but becomes uncomfortable after extended use (I think it is a combination of the angle and reduced "springy-ness"). However, I don't recall anybody complaining about the old keyboard unless they were die-hard full-travel people...

Fortunately, it's a very easy problem to solve on the iMac

Unfortunately, the old Aluminium wired keyboard was a really, really good example of how to make an acceptable short-travel keyboard. Fortunately, I have a couple of spares...
Score: 2 Votes (Like | Disagree)

mrzz
It's really difficult to understand that apple hasn't been able to create their own external backlit keyboard - what a shame.
Score: 1 Votes (Like | Disagree)

It's really difficult to understand that apple hasn't been able to create their own external backlit keyboard - what a shame.

do they know there is a demand?
Score: 1 Votes (Like | Disagree)

jamisonbaines
no pictures of the space grey model?
Score: 1 Votes (Like | Disagree)

I was under the impression that the new MacBook Pro "second gen" butterfly keyboard was about the same as the Magic Keyboard I have. Is that not true?

I've only tried the butterfly keyboards in a shop, but my brief impression was certainly that the 2nd gen in the MBP was better than the 1st gen in the rMB - similar travel but somehow better "feel", but it certainly isn't the same as the Magic - which is still a scissor mechanism.

The travel on the "magic" is somewhere between the "butterfly" and the "classic" key - but it ain't Goldilocks.
Score: 1 Votes (Like | Disagree)
Read All Comments