There are already Qi-based wireless chargers on the market that include a built-in battery pack for wire-free charging on the go, but the upcoming WiBa Power Bank from accessory maker Avido goes one step further by offering wireless iPhone charging and wireless charging for the power bank itself.

The WiBa Power Bank features a 5,000mAh battery that can be used to charge an iPhone X, iPhone 8, iPhone 8 Plus, or other Qi-compatible smartphone or device. It uses Qi wireless charging, so you don't need to connect it to your iPhone with a Lightning cable. 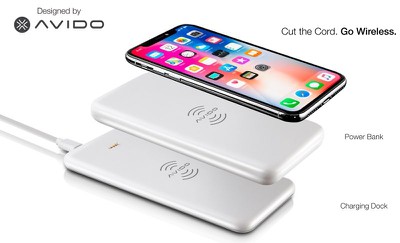 Two slim metal plates attach to the back or the case of the iPhone to make sure that it stays magnetically attached to the Power Bank when charging, and there's a built-in USB port if you need to charge non-wireless devices.

Avido says the WiBa Charging Dock is "Fast Charge compatible," but it's not clear if that means it works with the faster 7.5W charging in the iPhone 8, iPhone 8 Plus, and iPhone X, and there's no explicit mention of these devices, so it may only charge at the standard 5 watts.

The WiBa Wireless Power Bank will cost $99.95 when it launches later this year.

ElRojito
We need to go at least 2 dreams deeper.
Score: 14 Votes (Like | Disagree)

thebluepotato
That's one hell of a sandwich
Score: 8 Votes (Like | Disagree)

sidewinder3000
I like the innovative thinking, but the execution needs work. No one likes adhesive plates.
Score: 3 Votes (Like | Disagree)

bryan1andersons
Anyone find any cheaper but similar solutions?
Score: 2 Votes (Like | Disagree)

Will.O.Bie
I like the concept but can do without the adhesive plate that you have to stick on the back of your phone or case.
Score: 2 Votes (Like | Disagree)

JasonQG
What happens if you stack up more than one of these things?
Score: 1 Votes (Like | Disagree)
Read All Comments