Apple today released the second public beta of iOS 11.2.5 to its public beta testing group, one week after seeding the first public beta and one week after releasing iOS 11.2.1, an update that addressed a HomeKit vulnerability. Today's beta is identical to the beta that was provided to developers yesterday.

Beta testers who are members of Apple's beta testing program will receive the iOS 11.2.5 beta update over-the-air after installing the proper certificate on an iOS device. 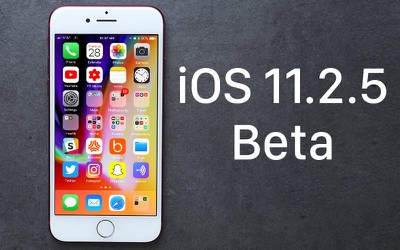 No new features were discovered in the first two developer betas of iOS 11.2.5, so it's not entirely clear what new features this beta introduces.

It's possible it focuses primarily on security improvements and bug fixes, and if that's the case, we may not know the extent of what's in the update until it sees a public release complete with detailed release notes.

johnalan
Does it fix the 'clicking' haptic bug when dismissing control centre?
Score: 3 Votes (Like | Disagree)

I’m running this beta on an iPhone X and I’m not experiencing a clicking haptic bug when I dismiss control center. However, I do not remember experiencing this bug on the previous beta, or the latest official release.

Thanks. Can you please try to (with sound on, not silent) open control centre. Then dismiss it from Home swipe up. Do this 3/4 times and hear click or soft haptic?

Maybe I will install it if it's stable.

got latest stable version of iOS 11 on my 6S and I can't back up your findings (but I got my battery replaced through the Replacement Program last year, so maybe thats the reason everything working so smooth o_O)
Score: 2 Votes (Like | Disagree)

eyeseeyou
I have IOS 11 running on my 5s and don't have any issues besides it being slower than my iphone x.
Score: 2 Votes (Like | Disagree)

Does it fix the 'clicking' haptic bug when dismissing control centre?

Yes it does. The clicking sound is gone with 11.2.5 Beta 2 very happy. But after installing the beta and deleting my beta profile, i can’t get rid of the developer email app. Well better than the click lol
Score: 1 Votes (Like | Disagree)
Read All Comments

Wednesday June 16, 2021 10:49 am PDT by Juli Clover
Apple CEO Tim Cook this morning participated in a virtual interview at the VivaTech conference, which is described as Europe's biggest startup and tech event. Cook was interviewed by Guillaume Lacroix, CEO and founder of Brut, a media company that creates short-form video content. Much of the discussion centered on privacy, as it often does in interviews that Cook participates in. He...
Read Full Article • 323 comments

Thursday June 17, 2021 7:33 am PDT by Joe Rossignol
Apple today lowered the prices of AppleCare+ plans for MacBook Air and 13-inch MacBook Pro models equipped with the M1 chip. Coverage offered by the plans, as well as accidental damage fees, appear to remain unchanged. In the United States, AppleCare+ for the MacBook Air now costs $199, down from $249. The new price applies to both M1 and Intel-based MacBook Air models, although Apple no...
Read Full Article • 139 comments