Apple's incoming chief lawyer Katherine Adams has received a generous bonus package in the form of restricted stock units, or RSUs, according to a mandatory disclosure filed with the U.S. Securities and Exchange Commission this week. 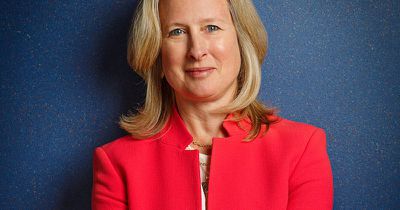 Katherine Adams
The first part of the award consists of 57,482 RSUs that vest in quarterly instalments on the 13th day of May 2018, November 2018, November 2019, and November 2020, so long as Adams remains employed by Apple on those dates.

Based on Apple's performance compared to companies in the S&P 500 over the next three years, Adams can see the second part of her award increased by as much as 100 percent, or decreased to zero if Apple were to underperform.

Based on Apple's closing price of $169.08 on Wednesday, each portion of 57,482 RSUs is worth slightly over $9.7 million for a potential total value of $19.4 million. The amount could be higher or lower based on Apple's performance.

Apple frequently awards its senior executives with restricted stock units as an incentive for them to stay with the company.

Adams will succeed the retiring Bruce Sewell as Apple's General Counsel and Senior Vice President of Legal and Global Security at the end of the year. She was previously general counsel at Honeywell.

They left out the most important item, structuring tax shelters to ensure Apple only pays taxes in island nations with favorable rates. That alone is worth multiple billions per year to Apple.

I never get comments like this, as 100% of the time the person making it always fails to respond to the follow-up rebuttal:

"Please describe the last time you paid a single penny more on your taxes than you were required to pay legally." I have yet, after all this time, to find a single person who has said "I paid X more for the good of the US and its debt load."
Score: 11 Votes (Like | Disagree)

trusso
I am sure she is very valuable to the company. Just as Tim Cook is valuable to the company. And they both work very hard at what they do, I have no doubt. It's important to remember, however, that in this world, so much comes down to luck. That is the sad but honest truth – reason for the rest of us to be content with what we have, and reason for those of worldly renown to remain ever humble.

I never get comments like this, as 100% of the time the person making it always fails to respond to the follow-up rebuttal:

"Please describe the last time you paid a single penny more on your taxes than you were required to pay legally." I have yet, after all this time, to find a single person who has said "I paid X more for the good of the US and its debt load."

That rebuttal is irrelevant, it isn't remotely comparable to the point originally being made. To be relevant, it needs to ask when was the last time that person didn't actively go out to research tax havens for their business and then do the necessary to register a company in said location (or whatever is needed) in order to then store their money there and avoid higher tax rates elsewhere.

Offering to pay more for a product is not the same thing and certainly not a rebuttal.

Of course, another reason why no one has replied might be because anyone who reads this forum regularly knows you are one of the most loyal and vocal defenders of Apple here, so are sure to find a way to criticise, discredit, find fault or simply deflect any such response - so they simply don't bother. Just like I probably shouldn't have.
Score: 6 Votes (Like | Disagree)

They left out the most important item, structuring tax shelters to ensure Apple only pays taxes in island nations with favorable rates. That alone is worth multiple billions per year to Apple.
Score: 4 Votes (Like | Disagree)

Can you provide evidence and references that Apple has not paid taxes that were actually owed the US government?

Re: Paradise Papers....
Score: 3 Votes (Like | Disagree)
Read All Comments