Disney Streaming Service Will Be Priced 'Substantially Below' Netflix at Launch

During Disney's latest quarterly earnings call, company chairman and CEO Bob Iger mentioned that its upcoming, exclusive streaming service will have a monthly subscription cost at an amount that's "substantially below" the price of rival Netflix (via Seeking Alpha). Disney has been dropping tidbits about its upcoming 2019 streaming service over the past few weeks, but had not yet hinted at how much the service will cost subscribers.

Iger still hasn't provided the specific price point viewers can expect to pay to watch Walt Disney Animation Studios, Pixar, Marvel, and Star Wars films and TV shows on the unnamed service, but we now at least know Disney intends to undercut Netflix on pricing. Currently, Netflix's $9.99/month standard tier (with streaming on two screens at once) is set to begin increasing to $10.99/month for subscribers this fall and winter. 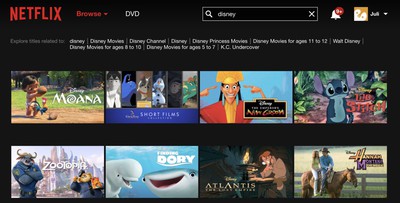 A few Disney films currently on Netflix
Of course, Netflix also has the basic $7.99/month plan (SD and only streaming on one screen at a time), so it's unclear which price point Iger may have been referring to. Iger did mention, however, that the Disney streaming service price will be reflective of the "fact that it will have substantially less volume" than Netflix when it launches. Disney sees this low price as a starting off point that will grow to "reflect the added volume" of content that is launched on the service in the future, similar to what Netflix is doing with its new $10.99/month price hike.


I can say that our plan on the Disney side is to price this substantially below where Netflix is. That is in part reflective of the fact that it will have substantially less volume. It'll have a lot of high quality because of the brands and the franchises that will be on it that we've talked about. But it'll simply launch with less volume, and the price will reflect that.

There's a gigantic potential Disney customer base out there that we're going to seek to attract with pricing that is commensurate with or that balances the quality of the brands and franchises that are in there, but also takes into account the volume. And that will give us an opportunity to grow in volume and to have the pricing over time reflect the added volume as this product ages.

After announcing the direct-to-consumer streaming service in August, speculation spread concerning whether or not Marvel and Star Wars would be getting their own unique streaming platforms. Disney eventually confirmed those two franchises would be integrated into the main service. In the new earnings call, the company mentioned some of the content will include four to five exclusive feature films each year and multiple original TV shows. The first set of shows will be a live action series based in the Star Wars universe, a High School Musical series, and a Monsters, Inc. series.

A report last week also mentioned Disney's interest in purchasing cable and movie assets owned by 21st Century Fox, which would include Fox's 30 percent stake in Hulu. With Disney's current 30 percent stake, the company would become a majority shareholder and gain another area to expand it streaming capabilities to consumers. While the two companies are said to not currently be talking, neither has given up on the idea of making a deal and "pencils aren't down."

With the launch of the Disney service, the company will be removing all of its films and most of its TV shows from Netflix. It's still unclear when that will begin happening, but it might begin sometime in 2018, ahead of the new service's launch in 2019. Currently, subscribers to Netflix can watch Disney movies including Moana, Finding Dory, Doctor Strange, and much more, which will all disappear by 2019.

ArtOfWarfare
It'd be nice if CBS recognized how little their service offered and would price themselves substancially below Netflix.

What are you talking about? Disney owns way more content than Netflix.

What are YOU talking about? Netflix has tons of original content now. Disney might have a big library of their past releases, but at this rate of original content Netflix is producing now, Disney is not even in the same category.
Score: 7 Votes (Like | Disagree)

It'd be nice if CBS recognized how little their service offered and would price themselves substancially below Netflix.

$7/month for one channel? Get out.

I used to pay one company (Comcast) $100 a month for all my TV services. What good does it do me when I have to pay the same $100 (probably even more) but to 10 different companies!? The notion of you being able to pick and choose is ridiculous as sports networks make it mandatory to have all providers to view all games.

This is why piracy will remain alive and well.
Score: 6 Votes (Like | Disagree)

576316
It's not difficult, considering Netflix is over priced.
Score: 5 Votes (Like | Disagree)

Zxxv
...and will rise gradually. Like placing a frog in tepid water and slowly turning up the heat.
Score: 5 Votes (Like | Disagree)
Read All Comments