In the new iOS 11.2 beta released this morning, Apple has added new informational pop-ups to let users know exactly how these toggles work. The new pop-ups explain that Bluetooth and Wi-Fi will be disabled temporarily rather than permanently. 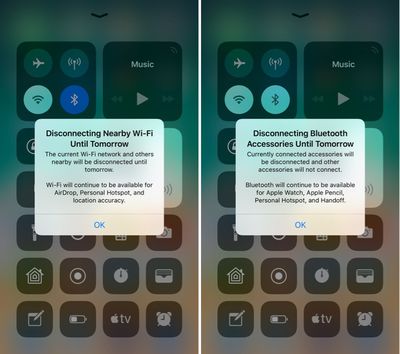 Prior to today's update, the Control Center toggles for Wi-Fi and Bluetooth could be somewhat confusing, because there was no on-device explanation. Apple outlined how the toggles work in a support document, but if you didn't see it, you might wonder why Wi-Fi or Bluetooth were turning themselves back on after being disabled via Control Center.

While Apple's new pop-ups offer a better explanation than was previously available, there are other situations where Wi-Fi or Bluetooth might be turned back on sooner than one day. When you use the Wi-Fi toggle in Control Center, Wi-Fi is disabled until one of the following conditions occurs:

- Wi-Fi is reactivated using Control Center
- You connect to a Wi-Fi network using Settings > Wi-Fi
- You walk or drive to a new location
- It's 5:00 a.m. local time
- Your iOS device is restarted

When you use the Bluetooth toggle in Control Center, Bluetooth is disabled until one of the following conditions occurs:

- Bluetooth is reactivated using control Center
- You connect to a Bluetooth accessory in Settings > Bluetooth
- It's 5:00 a.m. local time
- Your iOS device is restarted

To more permanently disable Bluetooth and Wi-Fi on an iOS device running iOS 11, it's necessary to go to the Settings app and toggle these features off in the Wi-Fi and Bluetooth sections. Apple likely made the change to Control Center in iOS 11 for a better overall user experience, as some iPhone and iPad owners might not realize the impact that turning Wi-Fi and Bluetooth off can have when it comes to iOS features like GPS directions, Continuity, and more.

In addition to introducing a message to let users know how Bluetooth and Wi-Fi work in Control Center, on the iPhone X, there's also a small UI change designed to make the Control Center gesture more obvious. Whenever you're on the Lock screen, there's a small bar underneath the icons on the right side of the device, letting you know there's more to see there. The bar is not displayed on the Home screen of an unlocked iPhone X, nor is it displayed within apps.

For those unfamiliar, accessing the Control Center on the iPhone X is done from a swipe down on the top right side of the device rather than a swipe upwards from the bottom.

Derekeys
I understand what they’re trying to do, but I believe it’s unnecessary.

Scottsoapbox
Why keep it an intuitive on/off when you can add a pop up explaining it? :rolleyes:
Score: 76 Votes (Like | Disagree)

theelysium
They are turned off to SAVE BATTERY DURPA-DURRRR Apple!

I want my OFF toggles back. I understand how to manage my antennas I don't need to be antenna coddled by Apple's OS.

We should be able to swap the toggles out or HOLD on the WiFi Bluetooth to switch them OFF!

I understand what they’re trying to do, but I believe it’s unnecessary.

The new way is much better. When I get to my car for example at work, it has a very weak connection to wifi. I don't want to turn off wifi, I want to just disconnect from work. The old way I would forget to turn wifi back on.
Score: 29 Votes (Like | Disagree)
Read All Comments