After first redesigning its iOS app and previewing a new update for Macs and desktop computers earlier this year, Microsoft has announced that its new Skype desktop software is launching today. The next-generation Skype desktop software is built to emulate the redesigned mobile application, which launched in June with an emphasis on media sharing and social networking features, although the iOS app's Snapchat-like "Highlights" feature isn't on Mac at this time. 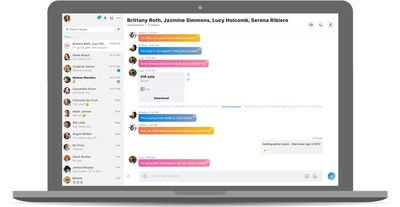 The new Skype Mac app connects across devices to the iOS app, and includes customizable themes, an organizable chat list, and cloud-based file sharing. A new "notification panel" lets users catch up on missed messages in one place -- including reactions, @mentions, and quotes -- and you can jump directly to these notifications by clicking on them.

A new chat media gallery has been implemented as a place users can quickly find shared content including media, links, and files. Add-ins can also be introduced into each chat, ranging from GIF-based applications to event scheduling, sending money, video sharing, and more.

When in a video chat or a text conversation, users can send reactions to express how they're feeling, and set status updates to let friends know when they aren't available. In total, Skype said that the goal for the new update is to help its users increase personal and professional productivity, while also unifying the Skype ecosystem across devices.

To download the new features, Skype said that anyone with automatic updates enabled on Mac, Windows 10 November Update (2016) and lower, Windows 8, Windows 7, or Linux will receive the update as it begins rolling out today. To download it manually, users can visit Skype.com.

avanpelt
Skype was my go-to video conferencing platform for years. The other day, I deleted the Mac and iOS apps from my devices because I couldn't remember the last time I used Skype. There are so many better solutions out there these days. Microsoft drove the platform into the ground.
Score: 11 Votes (Like | Disagree)

canadianreader
It's an update I will not put on my computer the iOS version has already been a disaster. Will keep the old fashion version until it becomes obsolete.
Score: 9 Votes (Like | Disagree)

Prabas
Why would anyone willingly update Skype to this ugly interface?
Score: 5 Votes (Like | Disagree)

I am in complete agreement with you. I am still using the older version on my iPhone, and I will not update to the new version on my Mac.

I made the mistake and updated my iOS version then I reverted back to the old version with Charles.app and iTunes. I also locked Skype on my mac in case it autoupdates without my permission.
Score: 3 Votes (Like | Disagree)

It's an update I will not put on my computer the iOS version has already been a disaster. Will keep the old fashion version until it becomes obsolete.

I am in complete agreement with you. I am still using the older version on my iPhone, and I will not update to the new version on my Mac.
Score: 2 Votes (Like | Disagree)

I stopped using Skype for a while now. There are so many other alternatives that are so much better that have cross platform support.

Such as?
Score: 2 Votes (Like | Disagree)
Read All Comments