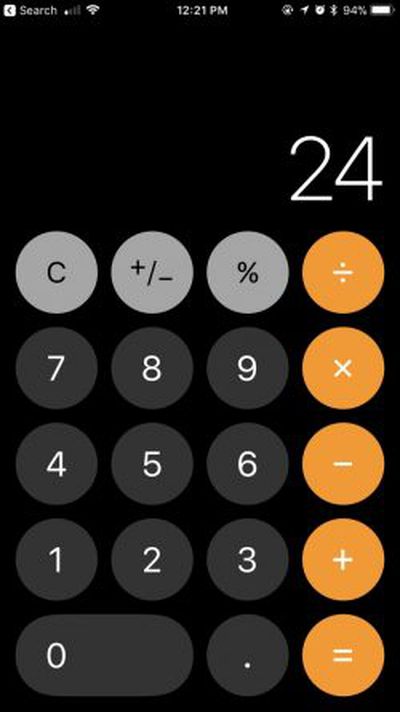 A bug in the built-in Calculator app in iOS 11 is getting some major attention this week, despite the fact that it's been around since iOS 11 was in beta testing.

At issue is a calculator animation that causes some symbols to be ignored when calculations are entered in rapid succession. You can try it for yourself: Type 1+2+3 and then the equals sign into the Calculator app quickly.

Due to animation lag introduced when adding two or more numbers together, your result is more likely to be 24 than 6.

The same goes for many other calculations -- the Calculator ignores some inputs unless you're entering numbers slowly enough to account for the light-up button animations that highlight the keys that are being pressed. Symbols do not register when tapped while a number button is still highlighted, resulting in incorrect calculations if you're inputting numbers quickly. Reddit user cplr describes the problem:

Any iOS developers will see what is wrong here: the bug is that the animation that lights up the button is blocking touch events until the animation completes. This is the default behavior for animations, but to make an app feel responsive it's best to find a way around that (it can be a one line fix, but sometimes it is complicated).

There are hundreds of complaints about the problem on reddit this week, but it's an issue that's been discussed on the MacRumors forums since the iOS 11 beta testing period. Throughout the beta testing process, the animation lag was not addressed, nor has it been fixed in any of the iOS 11 updates released so far. It's also still present in iOS 11.1.

Some users have experienced similar issues when using older versions of iOS, but the animation lag is noticeable enough in iOS 11 to make the Calculator nearly unusable when attempting to make rapid calculations.

Apple seem to be aware of the issue, because as The Loop points out, Apple employee Chris Espinoza says more than 70 people have filed a Radar report on the bug, alerting Apple to the problem. With it receiving so much attention, we could potentially see a Calculator fix in the next iOS 11 update.

In case you’re tempted to write a Radar on this, 70+ people have beaten you to it. https://t.co/xrMwJHqHiH — Chris Espinosa (@cdespinosa) October 24, 2017

In the meantime, iOS users who need a reliable alternative can use third-party apps like Calcbot and PCalc.
[ 346 comments ]

desmond2046
A calculator app is supposed to be a high school level project. Yet apple cannot get it right. This is extremely embarrassing.
Score: 97 Votes (Like | Disagree)

eyeseeyou
This is the calculator that provided the data that said the notch was a good idea.
Score: 55 Votes (Like | Disagree)

840quadra
Odd, animation for the + button slows down the actual input of addition. You have to wait for + animation to complete for it to take the rushed 2nd addition.

You would figure That turning on “reduce motion” would help a little, but no.

Maybe I can have my boss calculate my raise before this is fixed!!
Score: 40 Votes (Like | Disagree)

eoblaed
The calculator must be using that New Math we keep hearing about.
Score: 30 Votes (Like | Disagree)