Mastercard today announced that cardholders will no longer have to provide a signature for any purchases in the United States and Canada after April 2018. The change will apply to both debit and credit cards. 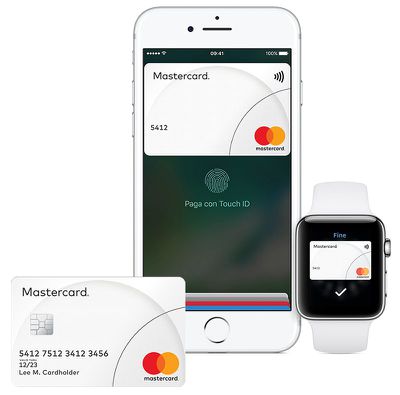 Mastercard said removing the need to sign for card-present transactions will not have any impact on customer security due to modern safeguards.

Mastercard's consumer research unsurprisingly found that a majority of people believe it would be easier to pay, and that checkout lines would move faster, if they didn't need to sign the receipt when making a purchase.

Already, more than 80 percent of in-store Mastercard transactions in North America today do not require a cardholder signature at checkout. Mastercard said both customers and merchants support the change.

The long-existing "signature required" clause is intended to verify that customers own the debit or credit card they are attempting to use. The process is supposed to involve the cashier verifying the signature on the receipt matches the one on the back of the card, but in reality, this process is often skipped.

The change should make Apple Pay transactions even quicker for Mastercard cardholders. Currently, even when using Apple Pay, sometimes a signature can be required for purchases over $50 in the United States.

The signature requirement is already very uncommon in Canada, where chip-and-PIN cards are the norm. At most merchants in Canada, customers insert a card into the payment terminal, enter a PIN, and the purchase is completed.

Mastercard removing the signature requirement won't speed up Apple Pay in Canada, however, as contactless payments aren't generally permitted for purchases above $100. Above this limit, customers must use chip-and-PIN.

Mastercard currently doesn't require a signature for purchases totaling $50 or less. Visa's no-signature limit is $25, but the amount is upped to $50 for purchases made at grocery stores and discount stores like Walmart.

farewelwilliams
finally. this never made any sense to me.
Score: 14 Votes (Like | Disagree)

LessO2
You mean I won't have to draw a squiggly line in the signature box anymore?
Score: 12 Votes (Like | Disagree)

einsteinbqat
Let’s all welcome our fellow American friends into modernity in getting rid of the signature LOL
Score: 11 Votes (Like | Disagree)

Yes, this.. I refuse to show ID when I buy anything with a credit card. It does NOTHING to increase security for either me OR the store.


Plus, now I've shown my drivers license with license number to some minimum wage earning employee who can memorize the information for later use.

It's just a terrible idea, all around.

2. Where do you shop where Rain-Man is the cashier-- memorizing your driver's license # within a 5 second glance??
Score: 7 Votes (Like | Disagree)

SirRahikkala
Awww, how cute. We europeans welcome you to modern banking. I haven't used signature in ten years (maybe more? different countries, different times). Chip+pin and last couple years NFC for under 25€ purchases and over that chip+pin. If the chip doesn't work (worns, but less than magnetic stripe) then you can always do the old school swipe and signature.
Score: 6 Votes (Like | Disagree)

newdeal
they need to get rid of the $100 limit up here. it sucks
Score: 6 Votes (Like | Disagree)
Read All Comments

Monday November 28, 2022 10:42 am PST by Juli Clover
Apple has cut back on its Twitter advertising, according to Twitter CEO Elon Musk. In a tweet, Musk said that Apple has "mostly stopped" its Twitter ads, asking if Apple hates "free speech." Musk went on to publish a poll asking if Apple should "publish all censorship actions" taken that impact customers and he began retweeting content from companies that Apple has had moderation discussions ...
Read Full Article • 1357 comments