A major new version of iStat Menus, a popular Mac system monitor for power users, has been released today for macOS High Sierra. 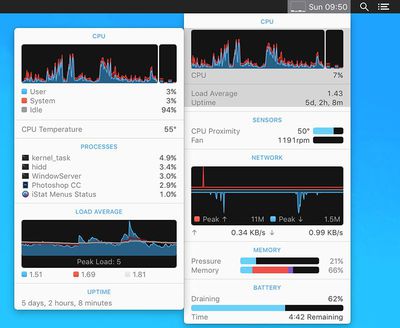 One of the biggest new features in iStat Menus 6 is configurable notifications for a wide range of events, based on CPU, GPU, memory, storage disks, networking, sensors, battery, power, and weather.

You can be notified, for instance, when your public IP has changed, if your internet connection is down, if CPU usage is above 60 percent for more than 10 seconds, or even of daylight saving time changes.

iStat Menus 6 features an all-new weather menu with the current temperature and conditions, hourly and weekly forecasts, notifications, and more. Weather-related notifications can be configured.

The update also introduces new ways to color and style the menu bar icons, dropdown menus, and graphs, including light and dark backgrounds.

Other changes include improved accessibility, localization, AirPods battery level support, dropdown menu reordering, automatic fan set switching based on events, and many other new features outlined in the version history.

iStat Menus 6 is available now for $18 on developer Bjango's website. Existing users with version 3.0 or later can upgrade for $9.99.

The app says "Powered by Weather Underground". How do you know the weather subscription uses Dark Sky?

I wish Weather Underground allowed people who own personal weather stations price breaks on things their partners do. I run a pretty advanced PWS and it feels weird paying for my own data via a 3rd party.
Score: 4 Votes (Like | Disagree)

They posted this a few hours ago, i've always been impressed with this app, big improvements.

Thanks! Almost every aspect of the app got a rework in this version.

Not really upset about that, but rather the fact that they sold it as a full product and made ZERO mention of a subscription based model for part of that same application I paid for.

iStat Menus 6 includes a 14-day free trial, and 6 months of weather data is included in the initial purchase. We use premium data sources, and we have to pay for usage every time weather is fetched. There really isn’t an alternative in terms of weather data sources, if you’re after something free, high quality, global, and with a license that allows commercial use.

We have some more info on the topic here: https://bjango.com/help/istatmenus6/weather/

I'm guessing it was required to license the Dark Sky data? But yeah, pretty bizarre (and all the more reason to add other providers).

We’ll definitely consider adding other providers in the future. We’re using Weather Underground for some locations.

Yes, I went with the upgrade as I've bought every prior iStat version. I've just got a personal preference not to purchase subscription based software. They should of made it clear that part of the application requires a subscription and I'd of gladly stayed quiet and stayed with the current version.

I don’t like subscription software either. We pay for weather data fetching based on each request, so we wanted something that aligned with how we get charged. Please note that weather in iStat Menus is sold as data packs that cover 12 months — they never auto-renew and there is nothing to cancel, if you decide you do not want it any more. It’s a subtle difference, but I think it is an important one.

No sooner do I type, another email comes in with the serial. Whew!

Great to hear. :) Thanks for your patience. There’s been some delays in the second emails (the important one with the license in it!).

I was using 5.X on macOS 10.12.6 and it automatically installed 6.0 (in truth, it probably asked me to update and I probably just said go ahead thinking it was just bug fixes).

The exact window you would have seen can be found here: https://bjango.com/help/istatmenus6/update/

However, then it popped up a window saying it needed to install "some components" but that fails every time with the helpful message "an error occurred". So I had to download and re-install 5.X. Turned off automatic update check.

Upgraded. I use it on all my machines-- $10 to keep the developer going is a pittance.

Thank you! It is appreciated. As long as people keep buying it, we’ll keep making it.

I wish they hadn't included the weather module though. I guess they feel they need to keep adding features to justify the upgrade price, but weather requires pretty specialized presentation. So far, I find ForcastBar has the best presentation, but the actual weather accuracy is crap so it's pretty-but-wrong.

What don’t you like about the way iStat Menus displays weather info? We’re always open to feedback, and want iStat Menus to be the best.

Does anyone have iStat Menu 6 reporting higher RAM usage than iStat Menu 5?

This is very likely due to the settings. Memory pressure vs traditional UNIX memory reporting, or “Hide inactive memory”. We added the ability to control what’s shown in the menubar per item. Here’s where the settings are now:

Did they ever fix MenuMeters? It broke a WHILE ago and the developer seemed to have abandoned it.

That's how it can be so light on resources. It doesn't run at all!
Score: 3 Votes (Like | Disagree)

Thank you. This worked for me.

Great to hear! Thanks for letting me know.

Great app, keep up the good work. This is just a personal preference.

Yep! I’d love to hear your preferences. We have some options to control how the weather menubar items and dropdowns behave, and we will continue to improve and refine them. This is just our first pass at it.

Of course I can turn it off, and not pay for the data, and I assume this is well written software so unused modules aren't a burden on resources-- so why am I calling out this module in particular?

I’d rather you thought it was so awesome that you kept it on. Feedback is welcome.

And yes, you’re right — turning off items in iStat Menus does save resources. We also don’t fetch some info until the dropdown menu is opened, which also helps. We do our best to keep things lean, given it’s an app people have running all the time.

Yep, it is a bit outside the main scope of the app. But, so are time, calendar and calendar events. The time item is probably my most used aspect of iStat Menus. We do need to be very careful about what is added though.

I know you need to keep the business going, so I don't mean to be critical of your decision making. Just expressing my personal preferences.

Please be critical! The feedback is good, and the discussion is welcome. Thank you.

if the app goes to subscription, I walk.

We have no plans to move to subscription, and I am speaking more for myself (@marcedwards ('https://twitter.com/marcedwards')) than Bjango when I say this: But I completely agree with you. I do not want all my apps to become subscription, and I think in many or even most cases, switching to subscription is a terrible idea for customers, for the product, and for the businesses that do it.

shareef777
The company issued me a refund and is very fast and responsive. While I personally don't like subscriptions I wish them the best.
Score: 2 Votes (Like | Disagree)
Read All Comments

Saturday February 4, 2023 1:30 am PST by Hartley Charlton
Google's Chromium developers are working on an experimental web browser for iOS that would break Apple's browser engine restrictions, The Register reports. The experimental browser, which is being actively pursued by developers, uses Google's Blink engine. Yet if Google attempted to release it on the App Store, it would not pass Apple's App Review process. Apple's App Store rules dictate...
Read Full Article • 181 comments