Apple's iPhone 8, iPhone 8 Plus, and iPhone X are not compatible with LTE Band 71, aka T-Mobile's new 600 MHz spectrum the company plans on rolling out in the United States as soon as this year.

Support for additional bands can't be added retroactively, so Apple's devices will not work with LTE Band 71 until support is added to future iPhones. 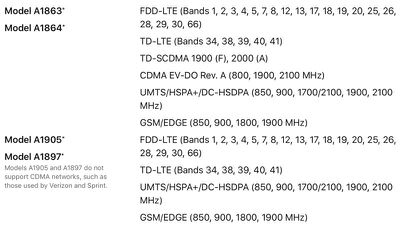 Unfortunately, by the time T-Mobile purchased the spectrum and announced plans for rapid implementation, the LTE chips and the hardware for the iPhone 8, iPhone 8 Plus, and iPhone X were likely already secured, giving Apple no time to build in support for a newly announced LTE band.

T-Mobile in August activated the first 600 MHz LTE site in Cheyenne, Wyoming and has said it will deploy the spectrum at a "record-shattering pace" with plans to roll out 600 MHz sites in Wyoming, Northwest Oregon, West Texas, Southwest Kansas, the Oklahoma panhandle, Western North Dakota, Maine, Coastal North Carolina, Central Pennsylvania, Central Virginia, and Eastern Washington, but whether T-Mobile will hit that goal and get 600 MHz support in those locations by the end of 2017 remains to be seen.

As Peter Cohen points out, deploying the 600 MHz network is a complicated, time-consuming process that will span several years, so most iPhone 8, 8 Plus, and X users won't be heavily affected by the lack of support for the new LTE band at this time.

Like every other carrier, T-Mobile is entirely dependent on a nationwide industry of independent cellular tower owners, operators and technicians to get their hardware deployed. Even if T-Mobile had unlimited funds to get a 600 MHz network up and running, there simply aren't enough people in the industry who can climb the towers, install the new hardware, test it and get it working for them. What we're talking about is a huge infrastructure effort that goes way beyond just flipping a switch and turning it on.

There are no existing devices that support T-Mobile's new spectrum at this time. Like Apple's newest devices, for example, Samsung's Galaxy S8 and new Galaxy Note 8 do not offer support. T-Mobile has said that LG and Samsung will launch devices compatible with the spectrum by the end of the year, and LG's upcoming LG V30 will be one of the first devices to support it.

They have to make a reason for you to upgrade in 2018.

Anyone working in mobile phone development facepalms heavily whenever that kind of conspiracy nonsense is spread by people who think that you just need to wave a magic wand to implement a major feature in a new product and that the lack of such a feature implies that it is being purposefully withheld.
Score: 47 Votes (Like | Disagree)

If I had ordered a new phone, this would be cause for me to immediately cancel the order.

This is very short-sighted by Apple. I understand that TMo didn't win the spectrum until earlier this year but the fact was that SOMEONE was going to win the auctions and it was going to be rolled out. It should have been built in.

I suspect we're going to get a slight revision to the 8/8+/X early next year that adds that band.

The band wasn't even finalized till a couple of months ago. There was no way this was making it in the 2017 iPhones.
Score: 41 Votes (Like | Disagree)

joshwenke
Don't be upset about this everyone. The key to a better network is NOT faster bands or "5G"...

We need MORE cell towers with BETTER antennas in those towers.

Once the infrastructure is in place (like in T-Mobile's case), THEN we can talk about 5G.

But seriously people, we don't even have true 4G support in most places. (LTE is not 4G).
Score: 32 Votes (Like | Disagree)

M.PaulCezanne
Looks like it won't impact me because I live near civilization.

This is very short-sighted by Apple. I understand that TMo didn't win the spectrum until earlier this year but the fact was that SOMEONE was going to win the auctions and it was going to be rolled out. It should have been built in.

Corect me if I am wrong, but I don't think apple builds the modems. I don't think anyone supports it yet.
Score: 14 Votes (Like | Disagree)
Read All Comments