Multimedia software maker Magix is offering MacRumors readers an exclusive discount, knocking the price of its advanced audio waveform editor SOUND FORGE Pro Mac 3 bundle down to $249, a savings of over $300 compared to the regular price of $557 for the entire bundle.

SOUND FORGE Pro Mac 3 is an advanced audio editing suite with multi-channel recording and editing, mastering for music and dialogue clips, and support for high-resolution audio recording at 24 bits with sampling rates as high as 192kHz. Users can edit down to the sample level and have access to customizable window layouts and configurable viewing panels to enable a streamlined workflow. 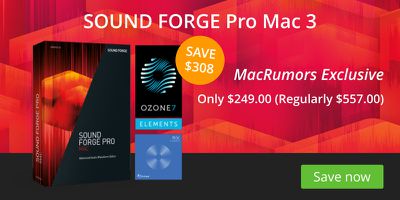 Note: MacRumors is an affiliate partner with Magix

Magix notes that SOUND FORGE Pro Mac 3 was optimized and designed for macOS, and can work with both native and third-party plug-ins. Here are a few other features found in the software:

Loudness metering - Precisely calibrated AES/EBU loudness meters help you make use of the entire dynamic range for broadcast audio while you ensure compliance with standards such as the CALM Act (Commercial Advertisement Loudness Mitigation Act).

Visit Magix's website to find additional details and purchase SOUND FORGE Pro Mac 3; no coupon or discount code is required to take advantage of the discount. The offer ends on Friday, October 13.

The MacRumors Deals Roundup has all of the latest Apple-related discounts, so check it out if you're looking for even more information on current sales.

bsbeamer
SoundForge used to be my go-to when I was on Windows doing audio work. Haven't used it in 10+ years after Sony took over. Went to Cool Edit Pro (now Audition) and messed with ProTools LE for awhile. For that price, at least give yourself a look at Audacity or ProTools First (free version).
Score: 1 Votes (Like | Disagree)

petsounds
I used Sound Forge a lot back in the day on Windows, but I don't remember it ever being that expensive.
Score: 1 Votes (Like | Disagree)

Is this license still for 1 computer? That has been one of my biggest issue to move forward with the purchase, since I now have a 2 computer work-flow for mostly everything.

@radio893fm: There was some discussion of this on the Magix forums (see https://www.magix.info/us/forum/installations-allowed--1194540/). The license is not completely clear. That said, I've installed it on both my home desktop Mac Pro and my RMBP, and it authorized without incident on both and I use it on both (not at the same time).
[doublepost=1512586107][/doublepost]

Anyone using this since Sony sold it to Magix? I'm curious about stability and quality. Magix hasn't exactly been known for Mac development, or even for high-end pro apps until now.

@KernelG: For some user feedback, check out the SFPM forums on the Magix site: https://www.magix.info/us/audio-forum/sound-forge-mac/

There isn't a lot of user feedback there (and even less participation or signs of attention from Magix). I think you'll see that user experience is mixed at best. There is particular dissatisfaction that the bulk of Magix's effort seems to have been directed at negotiating with 3rd parties (iZotope in particular) to provide plug-ins. I'm an iZotope fan, but I already have full versions of the reduced-capability included plug-ins. Other users are in the same boat. We feel a significant chunk of our SFPM expense is thus wasted. If you don't have the plug-ins and would find them useful, SFPM is probably a good deal. If the plug-ins aren't a significant value to you, it's hard to recommend SFPM with its current rather limited level of support from Magix.

For some published reviews (largely quite positive), see:

https://www.soundonsound.com/reviews/magix-sound-forge-pro-mac-3
[behind a paywall until Aug 2018]

KernelG
Anyone using this since Sony sold it to Magix? I'm curious about stability and quality. Magix hasn't exactly been known for Mac development, or even for high-end pro apps until now.
Score: 1 Votes (Like | Disagree)
Read All Comments