Charitybuzz today launched an auction for a rare Apple-1 computer known as the "Schoolsky" Apple-1. The Schoolsky Apple-1 earned its name from Adam Schoolsky, who was gifted the computer by Steve Wozniak when he worked at Apple. It was never sold to the public.

David Larson, who purchased the computer from Adam Schoolsky in 1994, is selling it via Charitybuzz. The Apple-1 was constructed by Steve Wozniak and it is in working condition. 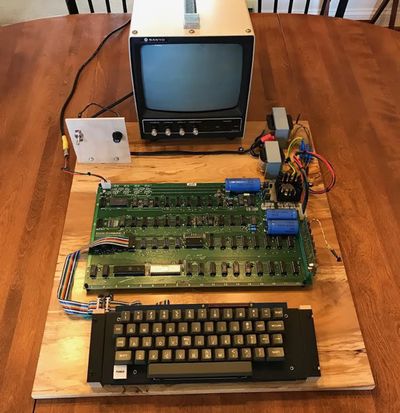 It comes with an original Apple-1 operation manual, original box, Apple-1 Cassette Interface Card and early cassette, an original advertisement for the Apple-1, three issues of 1970s magazine the Silicon Gulch Gazette, a conference program for the first West Coast Computer Faire, a letter from Adam Schoolsky to David Larson, a drawing from original Apple employee Ron Wayne, and more.

The Apple-1 Cassette Interface Card in particular is a rare find with an Apple-1, as most of the surviving machines do not include it. The card is designed to allow the Apple-1 to be connected to a cassette recorder.


Back when the company was first founded, Apple made 175 Apple-1 machines by hand. Only 50 to 60 of the machines still exist today, and just a handful of those are functional.

A portion of the proceeds from the Charitybuzz auction will benefit the Foundation for Amateur International Radio Service, aka FAIRS. Founded in 1991, FAIRS educates citizens about disaster preparedness and provides radio equipment and technology for areas in need.

Anonymous Freak
CharityBuzz annoys me. They have "charity" in the name, and the heavily advertise that "proceeds go to charity," yet on some auctions, it's a tiny amount. This one doesn't specify at all. It could be 100%, it could be 2%. (Note that the "experience" auctions, for "go to a movie opening with the star of the movie!" and the like, are 100% to charity. The celebrity doesn't get any money.)

Although even that is after CharityBuzz themselves take 20% as their fee. They are not a nonprofit. They are a for-profit business, with "Charity" in their name.

Slippery Gimp
My Mac Mini is more vintage than that.
Score: 2 Votes (Like | Disagree)

M.PaulCezanne
"It belongs in a museum!" - young Indiana Jones.
Score: 1 Votes (Like | Disagree)

melendezest
Apple's "Low Cost" days are far behind them.

Like all revolutionaries, they started out fighting "the Man" only to become it.
Score: 1 Votes (Like | Disagree)
Read All Comments