Facebook has begun testing out a new commenting feature on iOS and Android devices, allowing users to choose a custom colored background for their comment that all Facebook users will see underneath the original post. As of now, only "a small fraction" of users have noticed the new feature on mobile (via Evert Groot and The Next Web), so it appears this is just one of many early-on tests that Facebook performs in order to see how it might implement the new feature to a wider audience, or scrap it altogether. 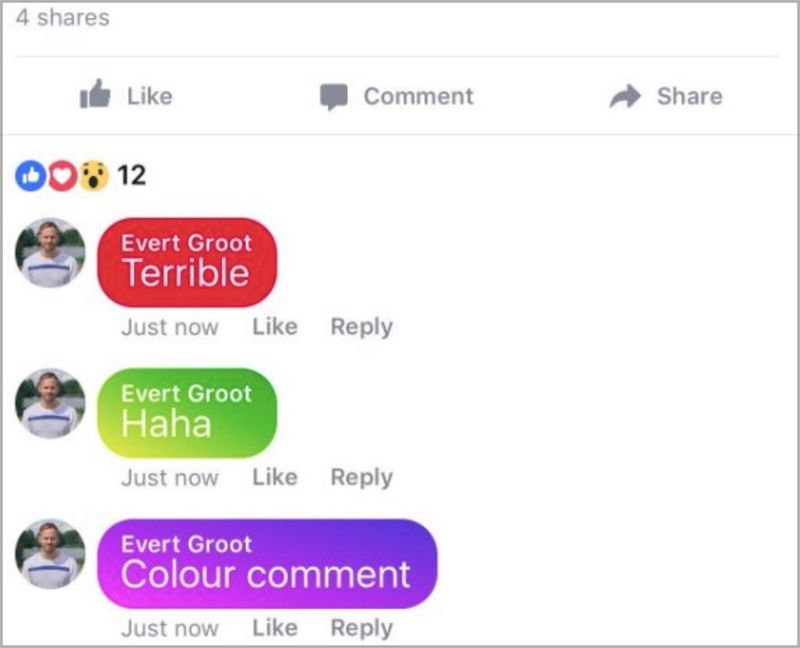 This is what Facebook’s NEW coloured comments look like

The colorful comments are an extension of Facebook's custom post background feature, which lets users choose a colored background and write a text-only post on the social network. That feature was one that originally began as a small test in December of 2016, and eventually expanded to all Facebook users throughout 2017. Some Facebook tests make it through to become official features, like the new Reaction buttons, but others end up simply disappearing.

Most recently, Facebook launched its new "Watch" tab on mobile devices, the web, and in Facebook's TV apps. The tab is full of Facebook-exclusive shows that are "made up of episodes -- live or recorded -- and follow a theme or storyline." Discovery is encouraged with user-specific recommendations, and a Watchlist allows users to save videos to watch at a later time.

In a separate report this week by Bloomberg, Facebook is said to be aggressively pursuing contracts with major record labels and music publishers in order to allow its users to legally upload videos with copyrighted music in them. The social network is willing to spend upwards of "hundreds of millions of dollars" in seeking these contracts, with negotiations having been ongoing for the past few months.

DisNerd
Or they could focus on keeping their device storage usage under half a gig...
Rating: 6 Votes

Northgrove
I'm among those who have this and I think it's a bad decision, both this and those new huge, blaring colored status posts. It's only a way to push your message with text size over quality and I don't really understand what Facebook is thinking.
Rating: 4 Votes

You're getting old mate. Don't worry you aint alone ;)

Yeah, I am getting old! :D Seriously though, those who use these things the most seem to be those who need them the least! Now where's my monochrome IRC channel...
Rating: 3 Votes