Apple is putting the finishing touches on its Apple Park campus in Cupertino, California, and a new video shared today by drone pilot Duncan Sinfield shows the company's recent progress on landscaping and other final construction projects.


Greenery is being added to the interior and exterior of the ring-shaped main building at a rapid pace, filling in an area that was once just mounds of dirt. Apple is using native plants and trees, and is said to be planting thousands of trees in Apple Park, including many fruit trees.

Much of the interior of the building is outfitted with furniture, and work is largely completed on the solar panels on the roof and the window shades that will protect the building from bright sunlight to moderate the inside temperature.

The Steve Jobs Theater, where Apple will host events, appears to be nearly complete, but there's still construction equipment in the area, so it's not quite clear if it will be ready in time for Apple's September iPhone event.

Along with the main drone video showing off Apple's progress, Sinfield has also published a 360-degree video. The video doesn't work in Apple's Safari browser, but if you use Chrome you can rotate the video to get a full view of the campus. On an iPhone, the YouTube app can be used with tilt gestures for a more complete picture of Apple Park.


Apple employees started moving in to Apple Park earlier this year, but it will take until the end of the year for the campus to be complete and for all of the employees to transition to the location.

Apple Park will be the home of approximately 12,000 Apple employees. Other Apple employees will work at the company's Infinite Loop campus and at other office locations in Sunnyvale, Santa Clara, Cupertino, San Jose, and San Francisco.

So this won't be ready by next months event I guess??

Only thing that needs to be ready is Steve Jobs Theater and I bet money it'll be finished in time. They have a few weeks.

I can't picture them revealing all of these things at a different location.
Score: 3 Votes (Like | Disagree)

BornAgainMac
I notice the drones never go close to a window to look inside or fly low to the ground for a closeup or interact with people on the ground. Can someone try that with their drone and post it here?
Score: 3 Votes (Like | Disagree)

apolloa
So this won't be ready by next months event I guess??
Score: 2 Votes (Like | Disagree)

Would be amazed if the iPhone event is held there. The auditorium looks half finished at best.

Really? Not so sure.. 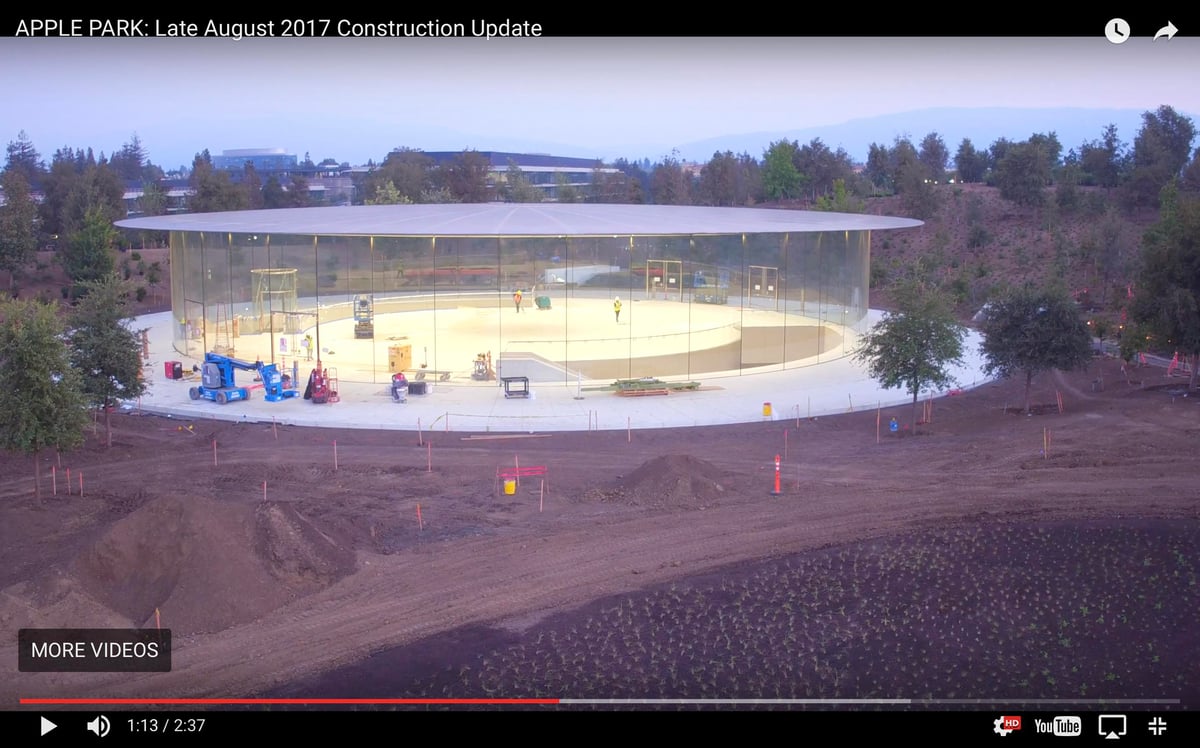 Do you have x-ray vision, an x-ray vision that works via video also? Since the auditorium is underground how would you know if its ready or not? The above ground stuff looks complete, almost a 1:1 replication to the drawings
Score: 2 Votes (Like | Disagree)

ILikeAllOS
If the campus (or at least Steve Jobs theater) isn't finished in time for the event, then Apple should hold their keynote at the same location as the original iPhone since this year is the 10 year anniversary. :apple: :)
Score: 2 Votes (Like | Disagree)

dannyyankou
It doesn’t look like there’s much work left to do on the exterior, three weeks should be plenty of time.
Score: 2 Votes (Like | Disagree)
Read All Comments