iFixit today released a collection of all-new Fix Kits for iPhone 7 devices that guide users through replacing batteries, cracked screens, and even the front and rear camera modules and sensors on an iPhone. 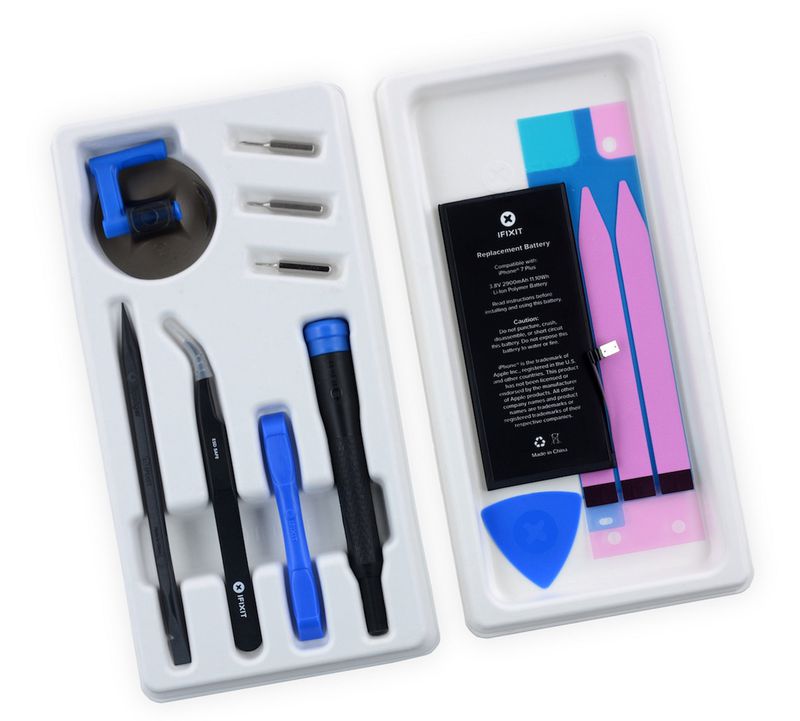 While each Fix Kit has a guide for users to follow, iFixit has also published a few How To videos on its YouTube channel, including an iPhone 7-specific playlist, to make following along to some of the repair kits even easier.

Depending on the issue at hand, and the iPhone model, out-of-warranty repairs directly from Apple can cost as much as $349 for an iPhone 7 Plus. Similar to iFixit's recent battery replacement Fix Kits for MacBook Pro devices, users have a chance to save money if they try out iFixit's guided replacement kits, as long as they are also up for the challenge of an at-home repair.

Itsedstech
Why not just take it to apple for the screen? $129 for the 7 and $149 for the Plus without AppleCare. Not to mention you get a genuine screen and don't have to worry about messing anything up.
Score: 8 Votes (Like | Disagree)

You could do that. But this is also intended for the more tech savvy individuals who are confident enough to make their own repairs or just for those who like to tinker with electronics in general. I also imagine third party repair stores would use specific kits like this as well.

But if you're smart enough to be technical, you're smart enough to understand that apple has better parts for less money and does it for you. I've spent the last 6 months telling people this "Apple made it a no brainer to replace your screen by going to them. They have completely undercut the market, stop trying to make the solution more difficult."

YEs if you live in rural Alaska and you broke your screen sure please order this kit but still.
Score: 3 Votes (Like | Disagree)

You could do that. But this is also intended for the more tech savvy individuals who are confident enough to make their own repairs or just for those who like to tinker with electronics in general. I also imagine third party repair stores would use specific kits like this as well.
Score: 2 Votes (Like | Disagree)

Having worked for Apple and replaced many, many screens, I can tell you that more often than not people who took their broken phone to be fixed at a kiosk or by themselves would damage the phone further. Also, Apple does not receive non-Apple parts; if you replace your screen, they NEED that original screen back on in order to swap the phone or the screen. Plus, it always looked like crap with some knockoff screen on it.

lack of ESD precautions and even simple things like keeping hands dry will do it. I watched a 3rd party guy replacing a friend's display and he was drinking a soda at the time and kept getting moisture on his fingers. On top of not being grounded etc.

and actually at least in the US they will replace a 3rd party screen, but at cost even if you are in warranty. i imagine to cover that they don't get the same trade in value as they do recycling their own displays.

Is it that cheap? A friend took his iPad mini 2 last year to Apple to fix a cracked screen and they quoted $250. I would think the iPhone screen would be way more expensive.

that's because there are no screws to take apart an iPad and they don't let their stores do same unit repairs on them. so you are quoted full out of warranty swap prices if you don't have apple care
Score: 2 Votes (Like | Disagree)

The display replacement kit for instance costs $134.95 for the iPhone 7 and gives youa knock-off display and requires you to transfer the TouchID sensor to maintain functionality, whereas Apple will replace the display for you at $129.99 without all the fuss. Same goes for the 7+ where the cost is $164.95 vs $149.99 from Apple.

The only time you end up spending less for a kit from ifixit is for the battery replacement where they will sell you one for ~$44 vs Apple’s $79. That being said your battery is covered under one year limited warranty and if you have any issues it would be replaced at no cost during that period. Having a battery replaced voids any repairabilty on the device, not just the limited warranty/AC+.

The $349 that the author is referencing is a whole unit swap for the iPhone 7+($299 for iPhone 7, since ifixit does not offer that as an option I don’t think it’s worth him mentioning and makes it sound as if Apple repairs are astronomically costlier than ifixit. Personally would have added Apple pricing respectively to make it a fair comparison
Score: 2 Votes (Like | Disagree)
Read All Comments

Monday April 6, 2020 2:56 am PDT by Tim Hardwick
Apple will announce a new 13-inch MacBook Pro in May with the codename J223, according to a rumor shared by YouTuber and leaker Jon Prosser. Note: it’s a refresh to the current 13” So the bigger 14” display upgrade is a big possibility— Jon Prosser (@jon_prosser) April 4, 2020 Analyst Ming-Chi Kuo has said Apple plans to release new MacBook Pro and MacBook Air models with scissor keyboards ...
Read Full Article • 167 comments

Tuesday April 7, 2020 4:28 am PDT by Tim Hardwick
Two images shared on social media this morning are currently stoking speculation about possible hardware redesigns coming to the iPhone 12 and the potential introduction of Home screen widgets in iOS 14. Shared by Twitter user Fudge (choco_bit), the images depict a front and rear graphical representation of a smartphone with interface elements on the screen, suggesting it came out of a...
Read Full Article • 136 comments

Tuesday April 7, 2020 10:06 am PDT by Juli Clover
Apple today released iOS and iPadOS 13.4.1, minor updates that come two weeks after the release of iOS and iPadOS 13.4, major updates that introduced iCloud Folder Sharing, a new Mail toolbar, trackpad support for the iPad, and more. The iOS and ‌iPadOS‌ 13.4.1 updates are available on all eligible devices over-the-air in the Settings app. To access the updates, go to Settings > General...
Read Full Article • 102 comments

Monday April 6, 2020 4:38 am PDT by Tim Hardwick
Further references to Apple's upcoming low-cost iPhone have appeared online, one on a Chinese e-commerce website and another on Verizon's smartphone trade-in page. Spotted by tech blog MySmartPrice, Chinese retailer JD.com has published a placeholder for Apple's so-called "iPhone 9" that includes a teaser image of a veiled smartphone, but other than that it lacks any particularly revealing...
Read Full Article • 115 comments

Tuesday April 7, 2020 7:00 am PDT by Eric Slivka
Rumors of Apple-branded over-ear headphones have been circulating for quite some time, while more recent rumors have mentioned an "AirPods Pro Lite" that could also be in the works, and Twitter leaker Jon Prosser's recent foray into Apple rumors provides a bit more detail on what we might able to expect for these products. Current Beats Studio3 Wireless and BeatsX On the over-ear side,...
Read Full Article • 78 comments

Monday April 6, 2020 8:17 am PDT by Joe Rossignol
A sizeable number of Mac users are experiencing occasional system crashes after updating to macOS Catalina version 10.15.4, released a few weeks ago. The crashing issue appears to be most prominent when users attempt to make large file transfers. In a forum post, SoftRAID described the issue as a bug and said that it is working with Apple engineers on a fix for macOS 10.15.5, or a...
Read Full Article • 253 comments

Tuesday April 7, 2020 7:52 am PDT by Eric Slivka
Last week, we laid out evidence suggesting that the just-released iPad Pro models do not contain a U1 Ultra Wideband chip, including the lack of any mention of the chip in tech specs or Apple's press materials, the absence of software support for U1 features, and more. Most tellingly, iFixit was unable to find the chip or related antennas in the device. Daring Fireball's John Gruber has follo...
Read Full Article • 105 comments