Hands-On With an iPhone 8 Dummy Model

With the prospective launch date of the new 2017 iPhone models just weeks away, iPhone 8 dummy models, printed mockups, and clones have been circulating regularly, giving us an idea of what to expect with Apple's radically redesigned edge-to-edge OLED iPhone is unveiled.

We got our hands on one of the high-quality iPhone 8 dummy models that's been making the rounds thanks to MobileFun and Olixar, and we've done a hands-on video to give MacRumors readers a close look at the design of the device and how it measures up to existing devices.

Subscribe to the MacRumors YouTube channel for more videos.
Our iPhone 8 dummy is silver, and with the glass backing, it looks almost like a liquid silver. The front features an edge-to-edge panel, and both the front and the back are encased by a stainless steel frame that matches the silver hue of the body.

There are thin silver bezels at the front of the device, and there's also a "notch" that houses the speaker, front-facing camera, and sensors, with this setup being used to enable a new facial recognition feature.

On one side, there's an elongated power button, while the other side houses standard volume buttons and a mute switch. At the bottom, there's a Lightning port and speaker holes, but no headphone jack.

When it comes to size, the iPhone 8 is slightly larger than an iPhone 7 and much smaller than an iPhone 7 Plus, but its display size is similar to the display of the iPhone 7 Plus because it does away with all of the thick bezels. This is a dummy model so it's not a functional unit, but the smooth glass back is believed to enable an inductive charging feature that will let the iPhone 8 work with wireless charging accessories.

The dummy model we have on hand is silver, but there are also dummy models available in a deep black and a sort of copper gold, and we've heard rumors suggesting the iPhone 8 (and the iPhone 7s and 7s Plus) will only launch in three shades - silver, gold, and black.

We can't be 100 percent sure the dummy models we've seen are accurate representations of what we can expect when the iPhone 8 launches, but they match up with leaked factory specifications, part leaks, CAD drawings, and information culled from the HomePod firmware Apple released in late July.

For that reason, we believe the dummy model in the video offers up a clear look at what Apple's iPhone 8 looks like.

BaltimoreMediaBlog
"Hands On" with a DUMMY MODEL? REALLY???

Is it April Fools Day again already? Or is this The Onion?
Score: 64 Votes (Like | Disagree)

Dwalls90
I think all of these mockups are accurate, but have one glaring incorrection.

The front panel will be black for all phones. Why? Well the front panel doesn't really matter anymore, since it's all going to be a screen (compared to prior models). Additionally, it will hide all the cameras and sensors that make this new iPhone tick. Furthermore, we should expect the top "row" of the iPhone to usually be black, since it will still primarily be used for the status bar, akin to this: 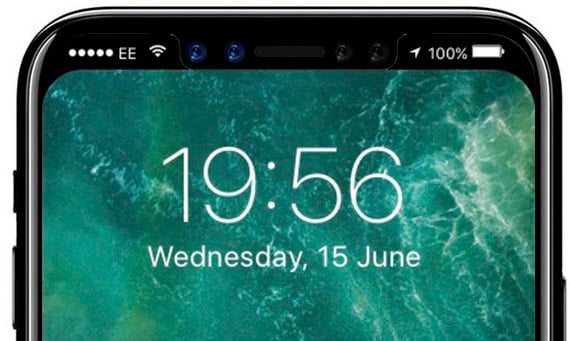 teknikal90
every iteration seems to get uglier than the previous.
the last good looking iphone was the 5S.
Score: 39 Votes (Like | Disagree)

Sunny1990
While the dummy looks close to what actual iPhone may look like but that top notch looks ugly with white front, Atleast it should be black so it blend in with display better.
Score: 26 Votes (Like | Disagree)

SigEp265
I really just can't fathom Apple having an unsightly top bezel like that. :/
Score: 23 Votes (Like | Disagree)

Sedulous
Could they make the camera bump even bigger? Wow that is ghastly.
Score: 20 Votes (Like | Disagree)
Read All Comments