When you purchase an iTunes gift card and redeem it in the App Store, the camera on your iPhone, iPad, or Mac can scan the code on the card to recognize it automatically, saving you the time of typing the numbers in manually.

Equinux, the company behind Mail Designer Pro 3, dug into how Apple's promo code engine works in an effort to make their own scannable cards, and the results are quite interesting. As it turns out, the scanning feature in the App Store is tuned to recognize two things: a unique, hidden font and the dimensions of the box around it. 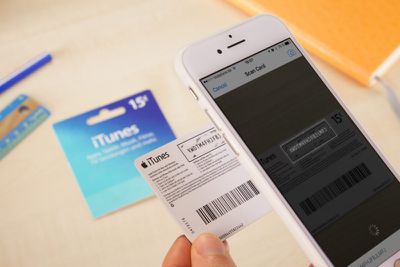 Equinux tried the box alone with a range of fonts like Courier and Monaco, and attempted to identify the unique characteristics of the font to find it, but were unsuccessful. Ultimately, the team realized the font that Apple's using is hidden deep within iTunes.

The breakthrough came when we noticed that when you scan a card with your iPhone, the app briefly displays a "scanned" overlay of the code. This means the font must be embedded in the app somewhere. We tried the same with iTunes on macOS. And voila - the iTunes on Mac behaves the same way.

When you look at some of the other folders inside iTunes, we found a tantalizing plugin called "CodeRedeemer." It showed promise. But alas, no font files there either. The app binary does give a hint of where the heavy lifting is being done: "CoreRecognition.framework."

Hidden in the CoreRecognition.framework, there are two fonts: "Scancardium," for entering and recognizing codes, and "Spendcardium," which appears to be for obscuring credit card details as they're entered. The two fonts can be found by going to Finder on a Mac, clicking Go, choosing Go to Folder and pasting the following: /System/Library/PrivateFrameworks/CoreRecognition.framework/Resources/Fonts/

With a simple double click, the fonts can be installed on a Mac and can be used within different apps. While this is a neat breakdown for end users, it's of particular interest to developers because these fonts can be used to create custom App Store promo code cards that can be scanned in the same way as iTunes gift cards.

Equinux outlines the exact font height to use and how to position it within the surrounding box to get Apple's engine to recognize it, details the company uncovered after investing a lot of time in tweaking fonts and the border of the required box.

Equinux even went one step further and created helpful Sketch and Photoshop templates that developers can use to create App Store promo code cards that can be automatically scanned using a device camera and recognized by the App Store.

linkmaster02
Is it legal to use the font in your own promo materials?
Score: 10 Votes (Like | Disagree)

cateye
There's nothing "secret" about using a font this way. There have been specialty fonts that make for easy and reliable optical character recognition (OCR) via "fuzzy" recognition (e.g. using a photograph) for years. Apple may have developed their own font for whatever reason, but there are literally dozens of speciality typefaces that allow for this. Barcodes work this way as well. Microsoft made a stink at one point how you could hold up a MS gift card in front of a Kinect and have it read similarly quickly. It's a bit of a parlor trick, but does save you from having to type in all those letters and numbers.
Score: 8 Votes (Like | Disagree)

Appurushido
Apple technology, not always the first, but they make sure they always try to make it the best!
Score: 5 Votes (Like | Disagree)

hmark8
Since one can only presume that font is licensed by Apple, not sure how developers would be able to use it legally unless Apple some day officially extends the feature to develops and open sources the font.
Score: 4 Votes (Like | Disagree)

PS: I'm almost certain it doesn't even scan the font but the barcode below it.

I just scanned a Homekit accessory code (It's similar), there wasn't any barcode under it so you are wrong.
Score: 3 Votes (Like | Disagree)
Read All Comments

Saturday February 4, 2023 1:30 am PST by Hartley Charlton
Google's Chromium developers are working on an experimental web browser for iOS that would break Apple's browser engine restrictions, The Register reports. The experimental browser, which is being actively pursued by developers, uses Google's Blink engine. Yet if Google attempted to release it on the App Store, it would not pass Apple's App Review process. Apple's App Store rules dictate...
Read Full Article • 273 comments